We have just come back from a long-long-weekend in Lydford, Devon… and it was a little more eventful than planned! 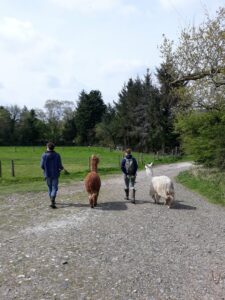 Things Wot We Did: 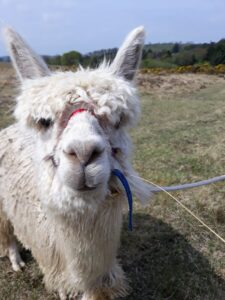 We were staying in Lydford Caravan and Camping Park, which was lovely – we bagged a great spot for the tent with a lovely view, and it was a really nice location. Everyone there was so helpful too! (Mostly with helping us find a garage so we could stick the exhaust back on and get back to Oxford…) and it’s a really nice little village. We tried the local pub (The Castle Inn) which does great fish&chips and a pint or two of the local cider, and also had a very friendly cat that we said hello to. 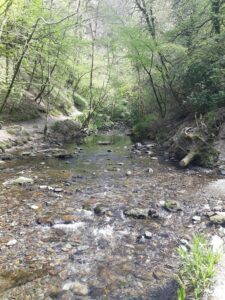 We spent a morning with alpacas at Lydford Gorge Alpacas, run by the wonderful Helen. Mr T was not exactly feeling the trekking bit, so we went to play in the stream instead, and then got to help give everyone a shower – and met a sheep! (Snowball. VERY floofy!) Walking back through Lydford Gorge was beautiful – it’s well worth a trek, and the walk from the waterfall side to the Devil’s Cauldron is the best (as it’s down by the river, and has the best views!) 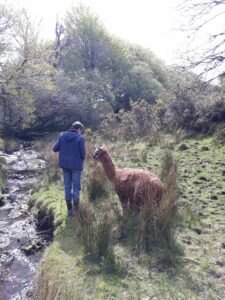 And then we got to see OTTERS and more OTTERS and some more OTTERS and the SQUEAKIEST BUNCH OF OTTERS and it was fantastic! We started off at Dartmoor Otter Sanctuary, where we got to meet a whole bunch, see some swimming (they have an underwater viewing tunnel and it’s fantastic – we had one point where two lots were swimming either side! They are so elegant, even when trying to gently murder each other) and also met a bunch of British otters, who included the aptly named Big Dave. (Think raccoon, basically!)

And then over to Dartmoor Zoo, where we met a bunch of lizards, spotted a snoozing tiger and a bunch of fluff that was probably a wolf, got (thankfully) ignored by the lions, saw the cutest Burrowing Owl chick (SO FLUFFY AND SO GRUMPY) and then got to feed the noisiest and most adorable bunch of otters! They were so cute, although the keeper did stop us out of sight to explain everything, as you can’t get a word in edgeways once the collection of general chaos in otter form spots you & the dinner bucket…

We also got to wander round Okehampton while picking up the (mended) car; headed over to the Eden Project for a lovely day looking at a ridiculously huge variety of trees; and generally got to admire a lot of really really nice scenery! We took the scenic routes wherever possible, and it’s totally worth the extra 15-30 minutes of driving; so many wonderful bridges, cliffs, valleys and views…

We are now home, got told off by the cat (who of course then had to sniff everything) and have managed to dry the tent out. A good few days away – even if a little* stressful! 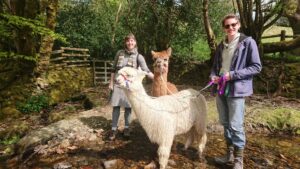 *Home managed to be a bit stressful too, as our cat-sitter forgot to feed Bobble at one point… thankfully another neighbour stepped in and he’s fine, but oh boy did we hear about it when we got back!