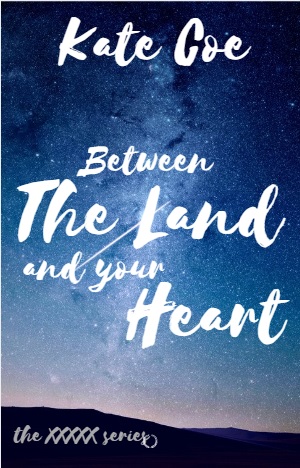 I am having fun with covers for my No Man’s Land series….and when I say fun, I mean a mix of “wow this is awesome” and “why on earth did I think trying to make covers for books was a good idea?!”

I had been recommended Canva, so I had a play with it. It’s a fantastic tool; it lets you either pick a template or you can make your own, and from that, you can pick from a bunch of free images and fonts, move text around, add images and borders, change colours…it’s obviously not up to Photoshop or similar standards, but for a free tool, it’s pretty damn neat.

I had a go with it for No Man’s Land (the title keeps changing as I’m playing with a few) and I did a whole series like the starscape here – and I adore them. They’re absolutely beautiful and they work and…sigh. I really, really like them. Seriously. The entire series together is just gorgeous.

Beautiful as they are, they don’t say “gritty urban fantasy”. They say “cute love story, possibly magic”. And that isn’t what I want – it’s not the market I’m going for.

So, back to the drawing board!

Or not. My next efforts were, frankly, shit. My main problem is that the urban fantasy genre is very human-figure-focused. Have a look at Amazon’s bestseller list, and you’ve usually got some sort of pouting, muscular female, probably some flame floating around, maybe a creature or two. It screams magic.

And I can’t find, or make, those sorts of images on a freebie cover creator that’s intended for literary & light reads or possibly, at a push, romance genres. It’s great and all, but it doesn’t do what I want for these books. (I think it would have similar limitations for children’s fiction, and most fantasy.)

So, I’ve put my hands up (in glee!) and asked a friend about a commission. The incredibly talented Karin Lanven is having a look at my notes  and rough ideas, and I’m really looking forward to seeing what she comes up with!

(On a side note: two people I’ve now spoken to about the covers have said, “Oh, then you need to write the books for those covers!” ARGH. Ok, they’re on the list…)