Trigger warning: suicide and depression (just in case the title didn’t warn you).

There’s been a lot in the news recently about suicide, for fairly obvious reasons, but I’ve been staying off Twitter because I can’t handle it. I know it’s meant kindly and it does help, but the message of “just talk to someone” or “just reach out” just leaves me knotted and angry and crying. I’m always going to be raging against the sheer futility of mental illness and the complete and utter fucking mess that our brains can make of our lives;  but I’m still frustrated and knotted and just…it’s taken time to untangle things.

But, in the middle of the messages of support and hope and friendship and love, I want to say this:

It’s not your fault.

But it’s not your war to fight.

It’s not your fault.

I miss him. Not every day now, but every week. I still call him an idiot. I still wonder what life would have been like if he’d won just one more battle, one more day. But I don’t blame him at all. I’ve been there. I know how fucking hard those battles are to fight, and how endless it all is, and I don’t blame him one bit.

And I’m finally realising that I did everything I could, and while it wasn’t enough – it wasn’t my war.

I’ve been seeing the motto, “Be kind. You don’t know what battles others are fighting.”

And that extends to yourself. Be kind to yourself. You can’t fight someone else’s battles for them. Stand with them, hand them friendship and love, support them; be the best friend and the best human you can be. But you can’t win for them.

This seems appropriate at the moment, both for me (the jungle’s pretty thick but I’m still going) and for a couple of friends who are facing tough times. Also I want a squeaky toy on my stick, then at least it makes a funny noise when I hit things!

Original source is Boggle the Owl, but it came to me via Reddit. 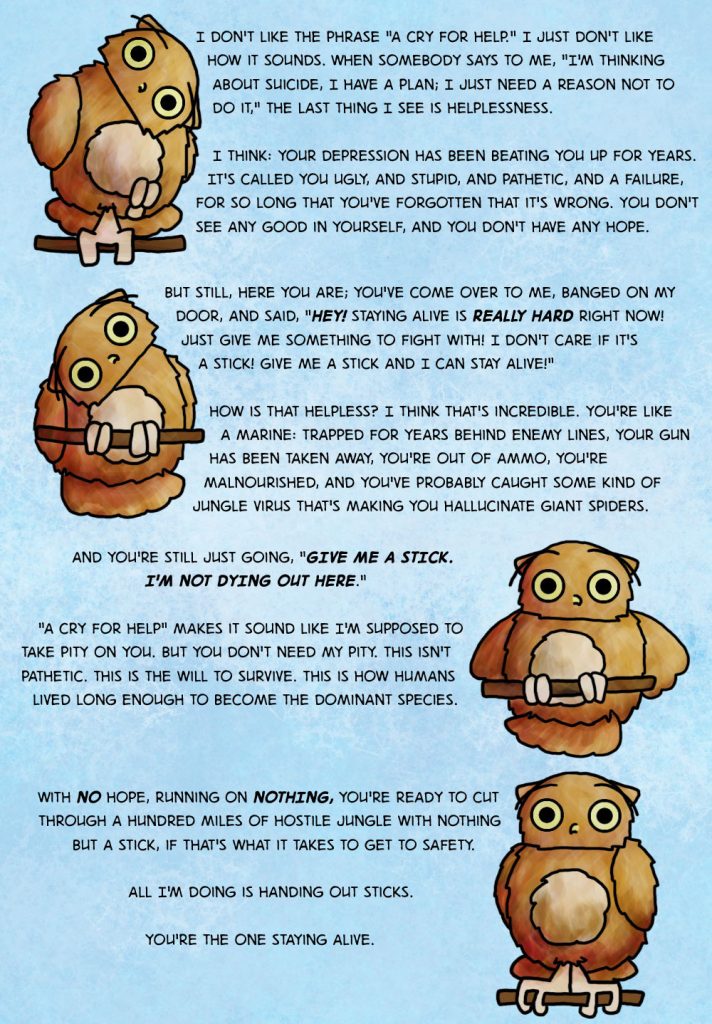 I was prompted to write a post on this by my friend Ellen’s blog. October is pregnancy and infant loss month, and this week (9th-15th) seems to have been designated Infant Loss Awareness Week. You may have seen posts on social media saying this, adding ‘I am the one in four’ (1 in 4 women will experience miscarriage/stillbirth in their lives).

This has taken a fuck-load of courage to write, and even more to post.

I am the one in four.

I have had three miscarriages, one just before Christmas 2015 (that made for a fun Christmas…) and two in Spring/Summer 2016.

I think for many people, the strongest pain of a miscarriage is the potential: this could have been a child, this could have changed everything. But for me, to be honest, it wasn’t as devastating as the loss some people experience. My mother had two miscarriages, and so I was in some ways expecting it; I knew there was a family history, and knew it could happen. I took what precautions I could, and didn’t dare treat the pregnancies as real until 12 weeks – it wasn’t a child, it was just a tiny potential bundle of cells. And none of my pregnancies reached 12 weeks (two miscarried at 7 weeks and one at 5), and so… it was just a thing that didn’t happen.

But I can’t help take that burden of fear and guilt, and push it forward: if I try to get pregnant again at whatever future point, will I have another miscarriage? Another two? What’s wrong with me that means I can’t get past 7 weeks? Standard tests haven’t shown anything: there’s nothing immediately physically wrong, and blood levels etc were all standard. My body’s fine….it just couldn’t maintain any of the pregnancies. And I’m now past 30: what will that do to my chances?

The whole thing was compounded by a specialist at the local hospital, who quite bluntly (while trying not to offend me, she repeatedly insisted that she wasn’t trying to offend me) told me that essentially, I was lying. I had no medical proof that I had been pregnant, and therefore they weren’t miscarriages: I hadn’t got blood tests, scans, checks – this all prior to 12 weeks, on an already overburdened NHS, and when there’s nothing anyone can do to change a miscarriage at that stage if it did happen! I’m still deeply angry about her attitude and her accusations: I understand where she was coming from in that the best medical course was to assume that I wasn’t able to get pregnant and check that as well as the actual pregnancies, which is sensible, but she most certainly could have worded it a lot better, and been a lot less cruel and dismissive in her attitude to someone who was simply trying to get help and work out if there was anything wrong.

I did feel – and still do feel – incredibly alone and uncertain about it. It wasn’t something I could share at the time; I wasn’t going to tell anyone until at least 12 weeks anyway, and even the people I did tell couldn’t say anything that eased what is, at heart, a very personal pain. My partner at the time did his best to be supportive, but considering he wasn’t outwardly enthusiastic about children, it was hard for me to lean on him or share any of what I was feeling. And I didn’t want to try any of the resources or groups available – I struggle with interaction anyway, and I felt I had no place amongst people mourning for their child. I just carried on going with whatever the next step needed to be, be it doctor’s appointments or waiting or another try, and tried again and again until everything else broke around me.

Even putting this out now is hard. It isn’t the full story: I can’t process that yet, it’s too linked in with the divorce and emotions and all that. I don’t feel I have any right to support, and I don’t want sympathy. It’s something that happens: I don’t know why it happened, I did what I could, and I don’t have a medical explanation. It passed, it’s fine, and I want to try again someday. It’s all still a jumble, and I’m dealing with it all as it comes up.

But miscarriage happens, and it isn’t talked about. So – I’m talking about it.

I’m the one in four.

Well, Salt Winds is coming together (I really need to update the section in my writing) and is approaching 25,000 words. I have one chapter left to write which is, usefully, the hardest…

I started the story with the idea of someone who, let’s face it, is a twat. And then life deals him a few hard punches (although most are of his own making) and he gets depressed, tries to commit suicide, fails and gets sent off to the seaside for his health. The rest of the story flows from there.

And the chapter I haven’t written yet is the first one, in which all of the above happens.

How do you write depression? How do I convey the absolute, overwhelming sense of hopelessness? How does it even work? I don’t want to end up with a chapter where all the reader is thinking is “oh, quit being whiny! Quit being useless!”. I mean, I already want to whack him round the head for being an arrogant, obnoxious idiot, so I don’t need to make it worse.

Depression isn’t easy to convey. Logically, when you lay it out, it’s simple. You’re feeling down; ok, so cheer up. Do something to make yourself feel better. No matter what life’s dealt you, it isn’t that bad; it could be worse. Just get up and do it.

But it really isn’t that simple. It’s all in your head, and that’s really hard to out across. I can lay out the reasons, I can lay out the feelings, but unless the reader can connect the two, and also understand – and empathise! – with Obak, it’s not going to work.

And one of the things that I really want to get across, which I think is the core of depression; people don’t try to commit suicide because they want to die. They commit suicide because they don’t want to carry on. Because they want to remove themselves from everyone else’s worlds – for everyone else’s sake. Depression is inherently selfish, but it’s also cruel. It turns you around, makes you think that you’re a burden on the people who care and a nuisance to those who don’t. It makes you think that it wouldn’t matter if you were there or not. It makes you wonder why you are carrying on. It makes you realise that you really don’t matter. It makes you realise how small you really are. How weak. How insignificant.

And if I get all of that right, if I manage to convey depression, then I need to show him getting better. That’s important. Depression strips away everything, coats it in a grey fog that doesn’t let anything in. I need to show that fog releasing its hold. I need to show small things breaking through, the shock when you realise that you can feel again, that things do matter; the horror and sadness when you remember how you felt, what you thought, and realise what it would have done. That there are always little joys, little moments that are important. That despite what the world tells you and despite what you thought, you do matter, no matter how small you are. I need to show that it can – and does – get better. That it can be beaten.

I need to show both depression, as it really is, and being able to recover. And I need to do it so that the reader understands.