I’m just back from a holiday in Rome – although actually, I didn’t see much of Rome itself! We stayed near the Forum, but went to Ostia Antica one day, and Pompeii (via Vesuvius) the second day – and then that was it!

I’ve already geeked out at Otter about the classical things (poor Otter…although they’re thoroughly used to it by now!) so you’re spared the overdose of comments – but both places were very interesting, if hot. Ostia Antica was busy but once we got through the entrance, actually very quiet; and Pompeii wasn’t too bad, although we were one of the tourist groups cluttering the ruins! I want to go back to both with additional time to spare, and maybe spend a day or two just wandering.

Both places were also very eerie, and so so interesting – it’s really nice to be able to see more than just a floor plan! Most of the buildings would have gone to a second or third story at least, and I loved being able to see the shop-fronts. The plaster and marble coatings were also fabulous – and so bright!

Vesuvius was fun (har har…but at least my travel companion didn’t push me in, so that’s a benefit!) and wandering around Rome on the first evening was nice; we ambled over to the Forum and Colosseum, and I got to geek out a little over that. Hopefully if I go again I’ll be able to spend some more time there!

We also ate So. Much. Pizza, and possibly quite a lot of gelato. It was AMAZING. #holidaywins

Back in sunny ol’ England now (it SNOWED? SERIOUSLY?!) and staring at my pile of work… but I did get some reading done on the flights at least!

For my Easter holidays I went to Norfolk with my family. We stayed in a big cottage. It was sunny. Things wot I did:

Paddled in the sea.

Didn’t get sunburned despite the beautiful weather.

Called my partner a wide variety of names, mostly because they stopped me taking over even more castles.

Ate too much, repeatedly.

Discussed microbiology, Nelson’s love life, book covers and the importance of foil, trust law, how to get to Ostia, wine regions, windmills and wind turbines, the Parthians and happy sushi… amongst a variety of other topics.

Ate quite a few chocolate eggs.

Overall, a rather nice holiday. Now back at…well, nearly full force, but I think I need some motivation! Back and here, anyhow.

*In comparison to last time I was in Norfolk, when I saw seven in one week. They’re apparently quite rare; my opinion after that week was that they’re not rare enough! 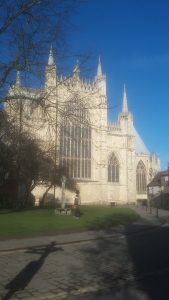 I’m lucky enough to get two holidays in the space of a week!

I was in York this weekend for a server install and a lovely sunny break. We deposited the server and got a tour of the data centre which was amazing, particularly as a front-end developer who doesn’t really understand servers! And York itself was awesome;  I’d been there before for a hen do but hadn’t got to see much of the city, so it was lovely just being able to walk around it. I got to visit the Yorkshire museum, walk around the walls, walk along the river…we had an amazing meal at El Piano (vegan restaurant, and it was good enough that the cookbook may have been purchased…) and visit a Roman bathhouse. I was in Classical geek heaven at the museum; I must have spent an hour walking around all the exhibits, chattering away like mad to my travel companion (who is very good at the nod-and-listen routine, thankfully) about all the bits and then they had an artefact showcase with some coins, a Neolithic polished axe, a brooch, some pottery…so I spent another twenty minutes or so chattering to the guy doing the exhibit about Edward I’s coinage reforms and the ubiquity of freakin’ green glaze jugware. I was eventually displaced by a wandering toddler and got dragged back out into the sunshine… 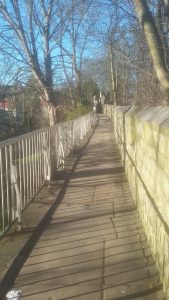 …and then found the bathhouse. It was the next day, though, which was probably a good thing for my friend’s peace of mind. Luckily he likes learning by random facts and being told stuff, otherwise I don’t think he would have agreed to go into the baths with me. Anyway, the man on the desk was a medieval history PhD student and as soon as I confessed to being a classicist, we were off. Constantine, tapeworms and parasites, malaria as a cure for syphilis, the lack of stirrups and how this affected cavalry tactics, religious symbols, the inability of chain mail to be taken off underwater, dating tactics for tiles and how this causes arguments amongst scholars, rye madness and hallucinations, Roman battle tactics, the similarity of caldera volcanoes and caldarium…we’d got onto Regency fashions before I managed to convince him to eat his lunch (which was definitely cold) and let us look round the rest of the baths. They’re not particularly extensive, mostly because the entirety of York is history and so there’s a limit to what you can dig out, but they’ve got some quite cool exhibit stuff and a dress-up section with a whole range of helmets (no, I didn’t try them on. And there aren’t any photos.)

Anyway, your life lesson from that is not to take me anyplace with Roman history unless you are prepared for a) squeaking, b) random facts, and c) a very happy Kate.

I’m now in Bologna for a week with my family – I’ve never been before and it’s supposed to be lovely, so I’m looking forward to it! I’ve got some writing to do as well, so hopefully it’ll be a week off before chaos starts. I’ll be sporadically in contact over the next few days, so if you don’t hear from me – I’m geeking out over history someplace! Only for a long weekend, but still. Holiday! Sea, sand…occasional sun…wind…a dog who smells rather of pondweed thanks to an impromptu play in the ditch yesterday…and no ice cream yet, but that may happen today – so not too bad overall!

I’m on the Isle of Wight for a few days with my family, so it’s nice to get away for a bit. Unfortunately it’s not all relaxation; I’ve got a stack of paid-editing to do, Terra Nullius stories to edit, websites to update, stories to finish. If I get my editing done, I’m going to finish editing Book 7 of GreenSky and then start working again on Book 10. I’ve also started work on No Man’s Sky again, as I had some inspiration while driving here, so that’s good.

Beyond that – books to read, family to talk to, walks to have. I’m just about to take one of the dogs and trundle round the River Yar while there’s some sunshine, so writing can wait!