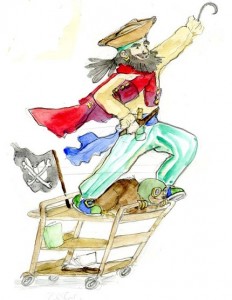 I’m redoing Madcap Library, my series of fantastical stories set in an imaginary library, featuring a sloth with a speed addiction, book hunters, a library pirate, ninjas, book owls and whatever other madness crossed my mind…

The wonderful Hannah Botma did images for me, and I’d honestly forgotten how much I loved these stories and characters! I’m just formatting books 1 and 2, and then I have book 3 to finish – which is going to be ridiculous amounts of fun.

I’m doing a short story, too, so keep an eye out over the next week or two for all of the madness! 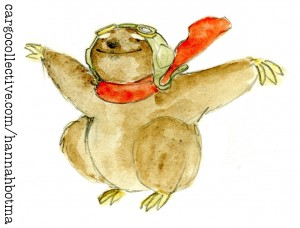 I haven’t done much work recently on Madcap Library as a story. However, it has been simmering in the background with regards publishing. My illustrator, the wonderful Hannah Botma, has been in contact with a children’s publisher who are interested in the Sloth, and we’ve been discussing ideas for children’s books. I spoke to various people last week, and now have two challenges to work on: a story-book for children aged 3-4, and another for children aged 7-9.

Considering that I have accepted that Madcap Library is written for children aged 10 and up (mostly due to the vocabularly used), it means the stories I currently have aren’t really suitable. In addition, only two of them are entirely Sloth-based; they’re also not suitable for illustrated stories as they are. So…I have to write new stories. *lays hand on forehead* oh woe is me, I have to write stories about the most adorable Sloth ever! And he is one of my favourite characters (I think the Libraneer beats him, but only just, and the Devil’s a close second).

I’ve just written two basic plot outlines for the 3-4 year-old story; they were relatively easy, as it’s simply distilling the ideas down into their simplest format. I suspect I’ve still managed to make it too complicated, but at least it’s something to work on, and the stories made me smile. I’m going to send them over to my test reader to see what she thinks, at any rate.   The stories for the 7-9 year-olds are harder, and also made me think about Madcap Library more generally. I re-read Madcap Library this morning, and I’m not sure what I want to do with it. I’m not sure if the stories are good enough for publishing; I haven’t submitted them to anyone due to the fact they’re short stories and in a series and I didn’t think anyone would want them. But the need to revisit them has made me question that. If I re-wrote them, or at least the first ones, could they be submitted?

My one problem is plot. I am pretty useless at finding the problem to be solved in a story; I like letting the characters run riot and interact and generally cause havoc by themselves. They don’t usually need outside events to help with it! But I appreciate that it does give a hook, it does give a flow, and that a lot of my stories lack that. It’s particularly obvious in Madcap Library, because the stories are a lot simpler and shorter than my other writing. It’s a critique that keeps coming up, and it is something I need to work on.   So I think I may start again with the first Madcap Library story, and work on the basis of “How do we solve a problem like the Libraneer…”

I was tagged on Facebook in a fun game to share five facts about my current main character, and I thought you guys would appreciate it too! I’m currently writing Madcap Library stories, so you get the Sloth…

2. He originally wanted to be a pilot, but fell asleep during the selection process. He has since discovered that there are other ways of fulfilling his speed addiction, but he keeps the flying cap and goggles because he might need them.

3. His favourite food is hibiscus flowers, as it’s the Sloth equivalent of chocolate.

4. After a minor incident involving long claws and the banisters, the Sloth joined the Bark Scratcher’s Society, as it keeps his claws trimmed (which is why you will sometimes see deep grooves in the bark of trees). The subscription is fairly expensive but is happily paid for by the other members of the Library Staff, who like their clothes left intact on the frequent occasions when they get hugged by Duster.

5. The person he would most like to meet is Kelly Brook, as he thinks she would be exceptionally huggable. The Head Librarian fully agrees with this point of view.

There you go! I am being tagged quite a lot in writing games, so I will have another post coming up shortly on Things I Write…

Gru’s back in the game, baby!

Two more Madcap Library stories completed, and three more people reading them. Apparently the Sloth’s the most popular – but then he’s my favourite too, so I think it’s entirely understandable.

Hannah’s doing some covers for me, and it feels like progress is being made! I may have an Amazon link soon, wheeeehehehe *goes to hide under the bed*