I must confess that I am a somewhat indifferent gardener; despite having a huge garden as a child (I managed to grown honeysuckle, mostly by dint of letting it do its own thing), an Aunt who is a fantastic professional gardener and a Mother who is very enthusiastic and grows All The Things, it somehow didn’t rub off onto me. I’m not as bad as my father, who Doesn’t Like Worms and therefore isn’t very keen on the whole “dirt” thing, but I also have a tendency to kill house plants, forget to trim anything and then be surprised when there’s a jungle, and mistake useful plants for weeds.

In short, for most of my life I have accepted that my talents lie elsewhere. 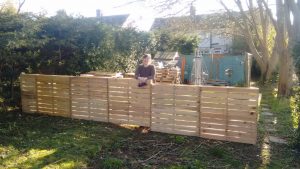 I’m pretty good at the practical bit of gardens – I can put up a fence, lay a path, turn over a flowerbed, haul a bramble out by its thorny neck… and I’m actually fairly good at the physical planting bit, that knowledge having somehow rubbed off and stuck. It’s just the actual details of growing stuff that escape me.

However! Otter and I have banded together, and we are going to Grow Stuff. Partly this is down to having an actual garden space, and partly the fact that having our own fruit & veg would actually be quite nice.

We are, however, sanguine about failure. Otter has declared that their definition of success is One Carrot, even if we have to surround it with snail-proof fences and targeted lasers, and keep a 24-hour watch on it. They’ve also threatened to wing any slugs found over the nearest fence, which I think is a little unfair to the neighbours. (That said, our neighbourhood gardening expert votes on feeding slugs beer, and then they drown happy. I haven’t yet suggested that to Otter.) And my definition of success is “some growing things that don’t all get eaten by slugs.” High hopes!

I have previously obtained seeds, so we spent a chunk of yesterday in the garden, taking stock and planting things. The previous owners had planted fruit, and we have gooseberries, raspberries, brambles that I assume may produce blackberries (here’s hoping) and for some unknown reason, an apple tree right in the middle of all of the above. Who the heck plants an apple tree in the middle of other things? Do you know how big those things get?! (Said as someone who had to cope with multiple bumper crops of apples while at the Spa.) That may be getting moved as soon as I can get my hands on compost and/or manure.

But we have one free raised bed (I don’t know if what I cleared out were weeds. I didn’t recognise them, anyhow, and I vaguely recognise some useful plants.) and I’ve put in peas, beets, beans, sweetcorn and… something else that I forgot. I’ll have to go look at the packets. We’ve also put in pumpkins and sunflowers, and I’m going to have a go with onions and leeks on the windowsill in the flat. And there’s tomatoes, peppers and courgettes to go into a hanging grow-bag as soon as I can steal compost from our neighbour.

So it’s a good start, I think… even if it’s going to be a surprise to see what comes up!