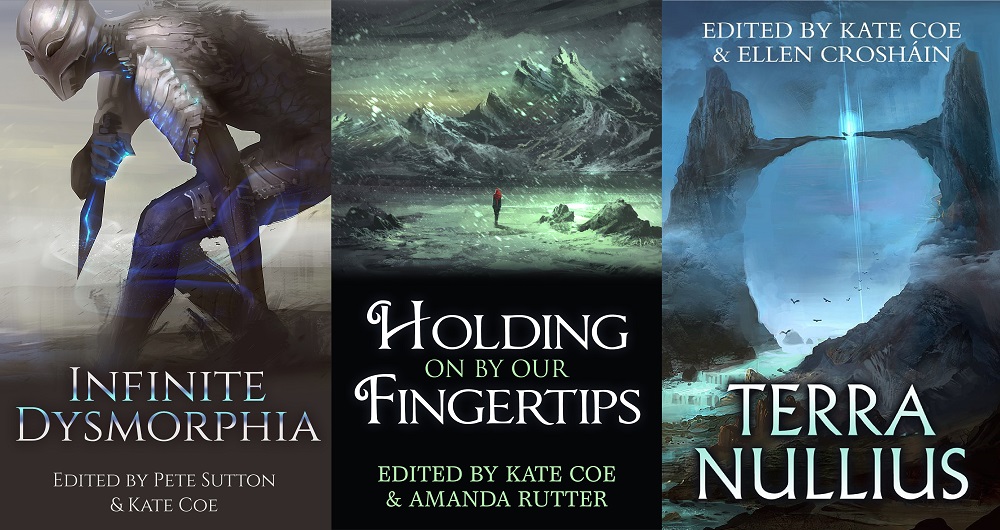 So, for the past….year?….I’ve been working on three anthologies, and we now have a publication date and launch event!

All three anthologies are going to be published on the 31st May, and the launch is in Oxford Waterstones on the 8th June! You can get tickets through Eventbrite for the Oxford launch, and keep up to date with everything on Facebook.

All three anthologies have been really fun to work on – albeit also a lot of hard work, and with quite a few tears (mostly caused by “Holding On By Our Fingertips” – don’t read end-of-the-world stories when you’re not feeling good). The authors have all been absolutely fantastic and I am so proud and pleased with all the stories – every book is packed full of amazing writing and worldbuilding, and, frankly, stories that I really didn’t mind having to read and re-read!

If you’d like an Advanced Review Copy then please do email kristellink@grimboldbooks.com, or poke me on Twitter/here. I’ll be advertising the buy links as soon as we’ve got them all sorted, and I’m really looking forward to sharing some fantastic stories with everyone!

I’ve just recently finished a beta read for Adrian’s latest novel, and saw him last week to give feedback on it. Well, I sent him an email with the draft and feedback, gave him a day to weep into his ice-cream bucket, and then met him for cake to discuss.

One of the things he and I both agree on with feedback is that it hurts. That never gets easier – no matter how many things you’ve submitted, I think it will always feel like a personal blow to get someone telling you that they hate your novel, and it’s the worst thing they’ve ever read – or in this case, I didn’t like the first half, and thought it needed rewriting. You need a day wallowing with ice cream.

And then you pull yourself together, get some perspective, and get to work.

The interesting thing with beta reads – and the trick to it, really – is to learn to separate your personal opinion and the problem. You need both – when I edit or beta, I make a point to add what I like as well as what I don’t like, because the author needs to know what’s working as well as what isn’t. But for the bits that I don’t like, it’s then a case of doing some analysis.

Do I dislike it simply because I don’t like that sort of thing? Adrian had gone quite Reservoir Dogs, and for me, the strength of the books in many ways is the heroism…and so having some nasty scenes is a jarring moment. Is it because it’s the wrong time in the book, or the wrong character? Is it because it just doesn’t fit?

So we sat and chatted, and spent some time working through what he was going for, what effects he’s using, why the scenes are there in the plot and themes, what works and what doesn’t…and I think we did eventually boil it down to a root cause (which was wrong character POV). But if we hadn’t done that analysis, all that would have come out was “rewrite the first half” – and it could have ended up as bad. I could highlight a problem, but then Adrian can counter with reasons those scenes need to be in there…it’s really interesting to try to get to the bottom of problems, and to understand why the reader is having the issue – particularly as this stage in a book, when the plot and characters are still fairly in flux.

And this is why people say that everything can be fixed in editing, and that you’re writing the first draft simply to find out what the story is. You get it all on a page, and then you tear it to pieces again – and rebuild. One of the other things to come out was that I felt one of the secondary characters didn’t get enough of a showing, despite having a few key scenes – and so the rewrite hopefully means that she can get wound further into the plot, and it will make her contribution better. So the changes potentially solve another problem that might have come up on the next round of edits.

It’s really interesting, and while it is hard work, I’m loving doing it.

*apologies for any spelling mistakes in this; I’ve got a cold and my fingers aren’t typing what my brain wants them to!

After several interesting conversations on Facebook, I’m extending my editing checklist…actually, I’m going to make it into a page, too. I think it needs it. Thank you to everyone who commented!

Which is a good point. I had a convo with @O_T_Curtis that made me think, too; when do those clichés become too much?

I also had some very interesting comments around jobs and farming (aka. sheep are buggers and don’t follow along nicely), and the importance of researching anything you want your main character to be doing.

And it’s now a page. If anyone can think of anything else, please do comment on the page or ping me a tweet! Things I have learned:

The problem with Empty Skies (Book 5 of the GreenSky series) was that I knew something was wrong with it; it took me a long time to finish it, and I just wasn’t happy when I did finally complete it. Then the wonderful @vicorva had a look at it and ripped it to pieces, which was brilliant! I did a complete re-write and then sent it to my editor Nick at Red Pen For Hire, and he’s come back with more thoughts.

This has been a major alpha-read, so the comments that came back were a mix of high-level and detail (including the multiple dash replacements). I’ve added a whole chapter, moved two sections backwards, shifted a third forwards, and cleared up quite a few detail-related misunderstandings. The floating islands are pretty weird, so Nick and I had a conversation last week about those (amongst other things) and I’ve added more information.

I’m lucky in that the characters seem to have come out quite well, so no major changes on those. The plot’s apparently comprehensible – it’s a murder mystery but has a lot of bodies, so I was trying to balance sense with the mystery element, and I think it’s worked. We get more of Anoé and Yeo and an additional two people (including Anoé’s daughter Jess), so that’s been fun too.

It’s just gone back to Nick, so I think we’re in beta-read stage! It’s also gone to my alpha-reader (aka my aunt) for another look. I’m a lot happier with it now, and I think it’s a better story for all the deletions and re-writes – sometimes killing your darlings or slash’n’burn really does get better results.

Next: more writing on Book 10!

The dull whine of the distant drop ship’s engines faded into the background noise of wind as the vapour trail edged ever onward towards the western horizon. It had been a setup.

“COME BACK! I HIRED YOU BASTARDS AND THIS IS HOW YOU REPAY ME!?”

Over the last two months, I have beta-read three stories, torn apart two and helped plan one. I email three people on a regular basis about writing (I offer an ass-kicking service on request), and I get the wonderful pleasure of reading some really funny blog posts from a friend who isn’t yet on Twitter – annoyingly, as I really want to promote her! I seem to have somehow become an editor as well as a writer…

My beta-reads include an absolutely beautiful and unusual Chinese/magic/fantasy by one Swindon friend, a thrilling sci-fi Western by @Nick_Hembery, and a magical fantasy (in installments). I’m also lined up to read an awesome story from @Figures. I spent three hours on Thursday morning going through plot, worldbuilding and characters for my cousin’s sprawling 3-series magical/sci-fi books which sound like a cross between Brandon Sanderson and Peter F. Hamilton, and at frequent points over the last few months I’ve been outlining, plotting, alpha-reading and shaking up a story from @O_T_Curtis. The quote at the start of this is from the opening chapter of his work – Requiem is my favourite character because he’s an absolute sarcastic bastard, and I’m really looking forward to reading the book!

I’ve also been reading and reviewing a lot. Over the past few weeks, I’ve read my way through a lot of the Grimbold Books back catalogue and reviewed several books, with several more to go…I stopped reading when I was doing my MSc (yay, dissertation) and never really got started again until now. Having a Kindle app on my phone has really helped with reading on the train, and I’m now starting to branch out into all of the stuff that’s on my to-read list!

I’m loving the chance to beta read other people’s work, and I think – I hope – I’m pretty good at it. I try to give an overview, general questions, my thoughts, enthusiasm and comments and wider questions. I try to think about what the work needs more of, what I’m missing and enjoying and thinking; if I’m asking the questions, so will the end reader, and I try to highlight general problems. I can do specific critique, and that’s one thing I think a beta-reader needs: you have to pay attention to what the author wants. It can sometimes be hard to rein in the editor, the proofreader or the snark or the “uh, I now have a list”…but if that’s not what has been asked for, don’t give it. I personally hate getting proofing comments when what I wanted was plot – if I’m going to rewrite, why are you telling me about spelling errors? Ragh.

I don’t like to be in isolation, though. I think most work needs several beta-readers (as @Figures pointed out, two of his original betas hated the work that he’s currently got extremely high hopes for) and you’ll get different comments from different readers. Everyone reads books differently, and particularly on a beta-read, you’ll get different ideas of characters; that’s partly why I try to give comment feedback, as how the plot and character comes out may not be how you intended. Did you mean for your heroine to be that unlikeable? (If yes, awesome!) Did you mean to share all of the background? Do we need quite that much info-dump now or is it going to be vitally important two paragraphs later? And why on earth did that person just do something they said they weren’t…ohhhh, someone’s pointing a gun at them. I missed that bit. Can you make that clearer?

So…I guess it feels weird to still be involved in writing, but not actually be writing. I haven’t done a lot of writing for myself, partly because I haven’t been in the mood and partly because I’ve been enjoying other things, but I do need to remember that editing and beta-reading do count as ‘writing work’! They’re both hard work too, and it does require a lot of concentration – and I have to be in the mood to do it (aka. have some brain power available). It’s usually anything between three to six hours to beta something properly, for anyone who thinks it’s easy! However, I love being able to read stories and make a difference on them, and if it’s a great read then all to the good.

@O_T_Curtis is impatiently waiting for me to praise his work, so I’ll publish this now – yes, Ollie, I like Requiem. Now get on with writing so I can read what happens next!