Having done my 300+ hours of editing work and my training courses and had some people be very nice about me, I can proudly say that I am now a Professional Member of the Chartered Institute of Editors and Proofreaders!

I joined when I first started Book Polishers, as it seemed like a useful resource (it was SFEP at that stage, and they’ve since gained Chartership) – and thanks to my work at Rebellion, I’ve gained the hours needed to progress to Intermediate and Professional levels a liiiiitle bit faster than the 2-5 years they expect it to take…

But it means I’m now officially an editor! A professional editor! Yay!

Next: wait for them to finalise the requirements for Chartership, and then see how many more letters I can add after my name…*

If you work as a freelancer or are employed in journalism or editing, it’s worth taking a look at CIEP – they’ve got some good resources, and if I’d known about the training courses when I was starting out proofreading, they would have been very useful! The network is also very good – albeit not so helpful for someone who works 9-5, but I’ve been able to use the forums and social networking, particularly during the current fun.

*currently BA, GDL and Msc Econ ILS. I’m trying to figure out what I can spell…

If you haven’t seen it already, a cartoon from the wonderful Tom Gauld. 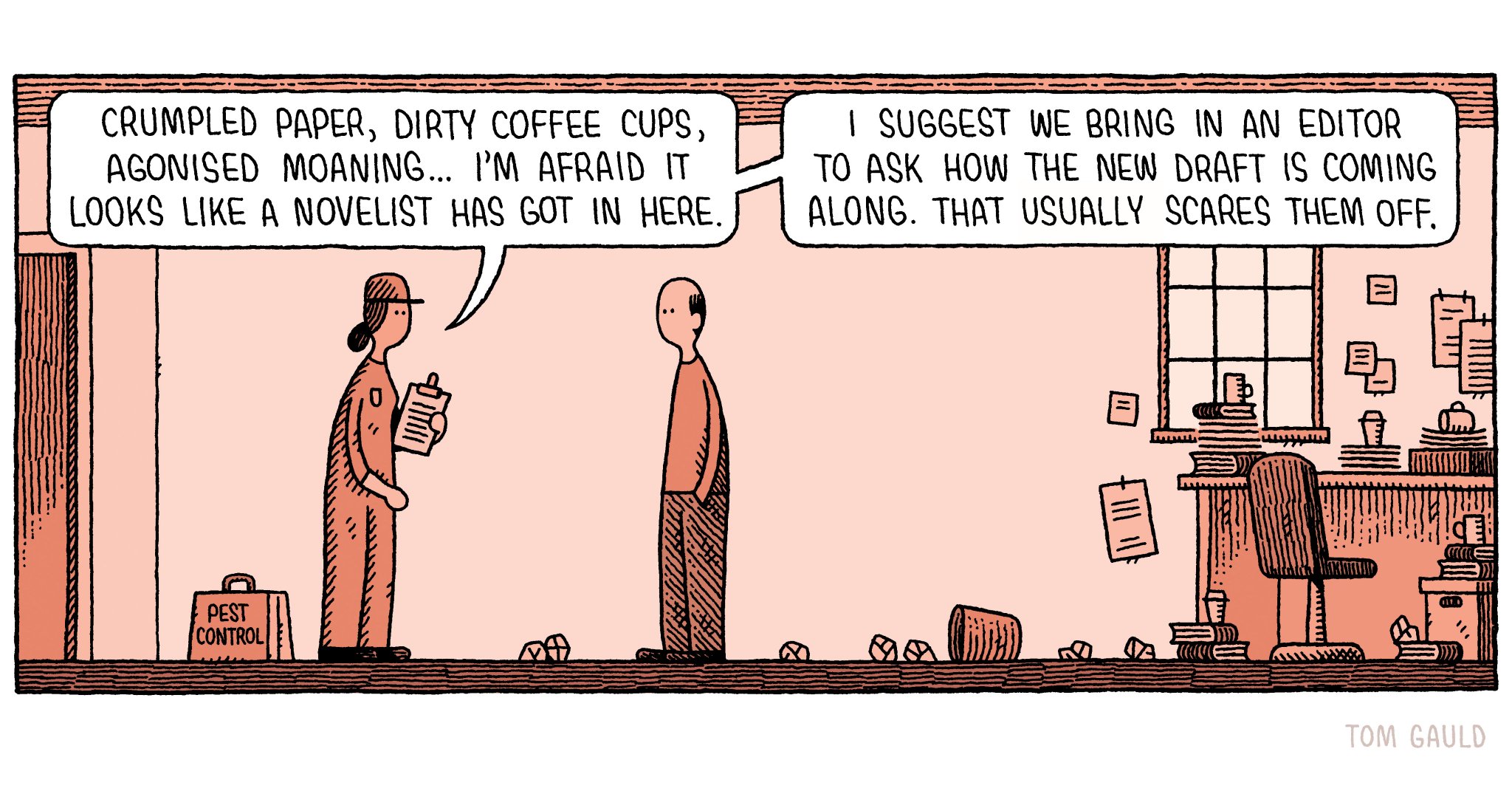 So, something I hadn’t entirely realised about this whole Being An Editor and Working In Publishing thing was that you have to deal with ALL the books that come across your plate. The Good, the Bad, and sometimes the Ugly.

(But, thankfully, we’re not talking about the Ugly today. That’s an entire ‘nother conversation.)

I’m incredibly blessed that both of the publishers I work for – Rebellion and Grimbold Books – pick Very Good Books, so the writing is excellent. The stories are good. The authors Know Their Shit.

But, because I’m not the Commissioning Editor and I don’t get to buy every book, sometimes I gotta read something that I don’t personally like.

Or read a rather unsettling book *cough*Wanderers*cough* for the seventh time.

And – and this was the thing I hadn’t entirely grasped – because I’m a speed reader, I read them. I mean, usually if you don’t like a book – it’s not for you, a genre you don’t like, the writing’s terrible – you can put it down. But not if you’re copy-editing, then checking the format, then putting proof corrections in, then making the ebook and then checking that… that’s five reads alone, even without a submissions or edit read (and I’ll usually have read at least some of the submission.) And I do skim; I do pick up enough that I’m reading. And with an unsettling book (Wanderers) or one that’s horror enough to give me the creeps (naming no names, @premeesaurus) then it’s enough that I do get affected.

It’s actually enough of a problem that I’m starting to gain coping strategies – admittedly, they’re mostly a) taking a break, b) chocolate, and c) telling my colleagues that THEY ARE DEALING WITH THIS ONE BECAUSE JUST NO, but it’s a bit of an occupational hazard that I hadn’t really considered previously!

I was at the London Book Fair 2019 as a Rebellion editor last week, and I’ve just about recovered…

David, Michael and I went as a free-range gang (although not corn-fed, as Ed Wilson joked) and essentially had back-to-back meetings for the three days; I think we had five official breaks in the whole time! It was hard and my feet hurt and I seriously hate people; the decision to put a bunch of people who have meetings in with a bunch of people who are Only Looking and then make the walkways narrow was not a great one, although not something that could really be avoided.

However, it was also really exciting; there were loads of good stalls and people, and apparently some really interesting events (although I missed them all!) It was so good to meet people that I’d either heard of or only briefly corresponded with, and also meet so many new faces. There are so many lovely agents, all of whom were really interested in what we do, and all of whom want to send us books! Yes, I know that’s their job, but still. They were all very enthusiastic.

The downside is that there were so many interesting-sounding manuscripts that we said “Ooh! Send it over!” to that I am probably going to be spending the next two months reading…

I have spent this weekend recovering (aka. sitting on the sofa playing Civ in between formatting jobs – the work never stops around here…) and now have a busy week that possibly involves reading manuscripts. I have the best job!

So over the last few months, I’ve been taking on more freelance editing, and I’ve started being asked for an editorial letter with each submission.

I mean, I usually do a letter anyway, sort of summing up and putting big thoughts in and giving some pointers, but…

It’s An Editorial Letter. Of all the Deep Editorial Thoughts.

Thankfully I had a chat to a wonderful colleague, who gave me some pointers, made some templates for me to look at and generally made me feel a lot better about doing it! I am extremely grateful for amazing people in the writing world who help at moments like that when I’m feeling completely lost (and I’m going to make him cake to say thank you!)

So I’ve never been very good at English Literature or Language. The problems with language started from not actually learning the basics in school – I can just about tell you what a verb and a noun are, but the rest? Not really…and that screwed me not just for learning other languages, but for analysing English, too. And with literature, I found that I can tell you what an author does, what to change to give it a different feeling, what to tweak to get a different effect…but I can’t ever really pinpoint exactly how they do it (or why having blue curtains makes a difference to anything). I’m coming at literary analysis from the reading side of “that just doesn’t seem right” and “try more X” rather than the writing side.

Once my colleague had calmed me down and I’d had a look at his templates, I did start to feel a bit better (and he pointed out I’d have to adjust them to suit my editing styles, so they’re just what works for him). I look at characters anyway. I’ll analyse plot. It’s just that I need to start pulling some of that work out of the manuscript comments and into a wider letter, and bringing it all into one outline document. I’ll need to have a think about things that are fine (and comment on them) and things that could be improved in a wider sense. I do it all anyway, I just need to adapt my format.

So…I gotta get my ass in gear, and learn how to do all of this properly! Editing’s easy, they said. It’ll be over by Christmas, they said…