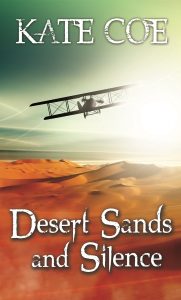 This is the next in the sparkpunk GreenSky series, set in a world of technology and magic.

You can get the Kindle or paperback, and if you’re after a signed copy then ping me a message 🙂 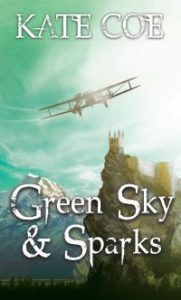 Also, if you aren’t familiar with the series (although this is relatively stand-alone so you can read it without having read the others) then the first in the series, Green Sky & Sparks, is currently 99p on Kindle!

In a world of magic, wind, and electricity, Catter Jeck is offered the chance to explore a myth. Travelling from city to city, his search for the centre of the magic catches others in its coils. When the Lord Heir of Meton offers to continue the search in his flying machine, the consequences of their crash – and Toru’s accidental link to a dying Healer – suddenly become of central importance to all of their lives.

Desert Sands & Silence will be released on the 4th May! And you can pre-order it already – don’t worry if you don’t do it now, I’m going to keep jogging your memory *evil grin* 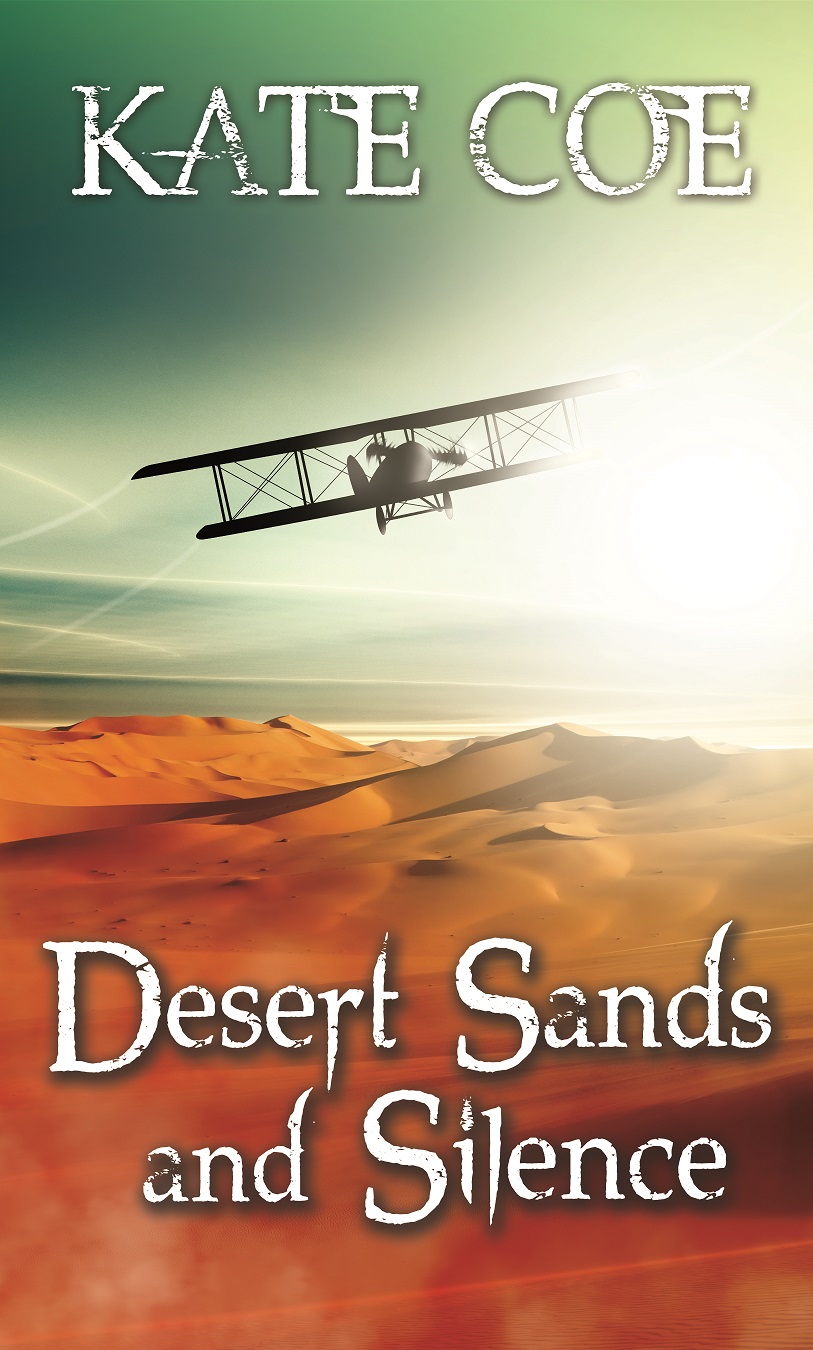 So, my NaNo word count is currently 23,000 (or something around that). But I haven’t done any work on it for the past week for one simple reason: I don’t have the characters ready yet.

I got halfway through Heights and Horizons last weekend; as I want it to be about 40,000 words, and I’m six chapters in and pretty much halfway through my story, that works brilliantly. I’ve also managed to plot roughly what I want to happen next: the second half is going away from Jesse and Huish, and it’s going to follow all of my explorers and my map-makers in the other lands.

However, I’ve got a slight issue. I have some of my explorers already (Moel from Desert Sands, Obak & Iilde from Salt Winds) but I also want to bring someone in from Empty Skies for Tao; I want someone from Ziricon who will appear in Desert Sands. And for those, I need three books finished – Salt Winds (to complete Obak and Iilde’s story), Empty Skies (to actually write my explorer character in Tao) and then Desert Sands, to bring my Ziricon explorer in and finish off another few stories.

So I spent my NaNo meetings this weekend finishing Salt Winds; I wrote 5000 words on Saturday and have the story finished, which is wonderful. It was read by my beta reader (my wonderful Aunt) last week and she had some brilliant suggestions for additional material and scenes, so I’m now a lot happier with the story than I was. It’s a lot more streamlined; the only thing that may need to go into it is more of Obak being a little shit, because at the start, he really is. But at the moment, I’m happy to call it complete.

So, this week is going to be Empty Skies; I’ve got to put the cat amongst the pigeons (or policeman amongst the runaways) which will lead to some very fun writing. That’s likely to take me most of this week and probably my writing time this weekend. After that, it’s Desert Sands again, and then back to Heights and Horizons!

I’m actually not particularly bothered by the lack of progress on Heights and Horizons. Although my words don’t count towards NaNo, I didn’t expect to win (thankfully, as I know I’m a novella writer!) and I just love the writing company and the kick-up-the-ass it gives me. So to get a story finished, and get the kick I need to finish Empty Skies and carry on with Desert Sands – that’s brilliant.

And the final thing that’s making me smile at the moment is that I’m really looking forward to continuing work on Heights and Horizons when I do get back to it; I’ve got some politics, some exploration, some interesting characters – and it’s going to be a lot of fun to write. So even if it does go out of November (which it likely will), I’m still going to enjoy my writing.

After what has felt like an age of not writing anything through a combination of no time, feeling like my head was filled with sand, and not being sure what I want to happen, I am writing again! Desert Sands is on the go this time.

I wrote half of the first chapter a while back, and knew that I needed to get into the plot quite fast after that beginning. So this afternoon has consisted of finishing the first chapter and starting the second, and getting my teeth into the details of the plot and characters. In addition to the new characters and setting, I get to play with some new technology in Desert Sands, and I also get to write Jan, who is a lot of fun – partly because he’s so formal, and partly because he’s so savvy. I haven’t yet brought him into conflict with the Belmont politicians, but I think that is going to be…interesting, shall we say. And lots of fun to write.

I’m currently taking a short break while working out a timeline – unfortunately, when dealing with desert runners, I have to turn my thinking upside-down. They run at night, so that’s technically their day, and then sleep during the day, but then everyone else is working on normal day/night timings. So if someone was meant to turn up during the night, how many days is that? *scratches head* I do need a spreadsheet to make sure I’m working it out correctly, but it does make me feel a little…pedantic, I suppose. Another sign that I’m turning into a Proper Writer who can’t just wing her plots any more!

On a random aside, I’ve been writing to Linkin Park’s “A Line In The Sand” for most of this afternoon; no idea why, but it seems to be the kind of brain music that works. I think I’m on 28 repetitions, so I may be getting a little fed up of it soon…although it is one of the songs I have to learn for music, so I suppose that’s good – I’m definitely learning it!

Anyway, have a snippet:

Belmont at night was a city aflame. The frozen fire glowed, casting out a golden light akin to the fire in its name, and also sent out a dull warmth that was never enough to heat, but enough to take the night chill off the air. Moel found that she noticed things that were…not exactly hidden, but more unobserved during the day. The intricate carving on a block of frozen fire danced and shifted as she walked past; the worn stone of a doorstep displayed the curve of generations of feet in the subtle light; a tiny plant that had taken root in a crack just above a window, stretching out its tiny pink flowers to revel in the heat of the frozen fire just below it.

The awnings refected the light back down, glowing themselves like wings in sunlight, and the night-dwellers filled the streets of Belmont. They mostly wore robes, and in the golden glow of the frozen fire, they glowed themselves; their pale skin caught the light and their dark eyes shone, white robes floating around their bodies like an afterglow of flames. There were a few day-dwellers still around, their skirts looking duller in the subtle golden light, their dark skin almost black in contrast to the pale glow of the night-dwellers. But both groups lived together easily, side-by-side in their seperate cities, divided by the sun and the sky.

What makes this blog hop so special and different from all the other thousands out there is that it gives YOU an enticing first glimpse into an author’s future work, long before it hits the bookshelves, or in this case before it even hits the publishers. I’m hoping it will give you some insight into the process, as well as being an enjoyable poke around the insides of my head.

Seven questions about my current WIP, before I nominate others…

I’m going to talk about Desert Sands and Silence, which is my current novel in the Green Sky series. It’s only on the first chapter at the moment so on 2300 words, but should end up at about 35,000.

1. What is the name of your main character? Is he/she fictional or a historic person?

My main character is Moel, who is fictional.

2. When and where is the story set?

It’s set in the Green Sky world, in the land of Orei, which is a desert country with two main cities: Belmont, beautiful and sophisticated, political and complex; and Huish, a centre of learning and study, at the forefront of the new scientific discoveries. It’s set about two years after the events in Green Sky & Sparks.

3. What should we know about him/her?

Moel is a runner, taking urgent messages across the desert between Belmont and Huish. She’s never liked people; her home in Huish is taken up by the conflict between her daughter and son-in-law, and her stays in Belmont are spent avoiding the tangled politics and backstabbing of the city. She lives for the emptiness of the desert, the rhythms of the day and night, the simplicity of the travel – and the lack of human contact.

4. What is the main conflict? What messes up his/her life?

On a desert run, she crosses paths with a group of engineers from Meton, who are there to survey the landscape for a new spark line across the desert. But when she reaches Belmont, the group has vanished. As the best available desert runner, Moel’s assigned to take the investigator from Meton out into the desert and find out what’s happened…

5. What is the personal goal of the character?

6. Is there a working title for this novel, and can we read more about it?

Desert Sands and Silence; I have put some information on the Green Sky pages, plus a draft of some of the first chapter!

7. When can we expect the book to be published?

As it’s the sixth in the series, if we keep up current progress it would be June 2016.

Pass the baton on!

I nominate one of the Swindon Freewriters, Jamie Rowell, to talk about his WIP.

My fellow Kristell-Inker, Sophie E Tallis, has already done the hop – go and check her work out!