Despite feeling snuffly and tired, I got myself to BristolCon 2018! (Well, with the help of Sammy and Joel, who assisted in dragging me out of bed and into a car at a far-too-early hour of the morning…) 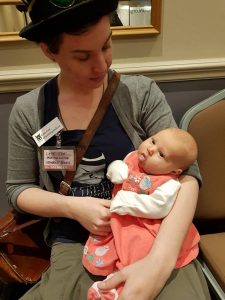 It was a much more chilled BristolCon than I’ve had previously; as I was expecting to be on the Grimbold stall for the day, I hadn’t booked myself in for any panels, and only had a few people that I was wanting to see. It was a definite bonus to arrive and find a wonderful gang of people that I did want to talk to – including the ever-deadpan Dave Hutchinson, Pete Sutton, Chloe Headdon, Stephanie Burgis, all of the Grimbold team (including our newest arrival, 5-week old Lia!), Anna Smith-Spark, Anne-Mhairi Simpson and Nick Hembery! It was great to meet faces that I either knew and hadn’t met in person, or were completely new – and to manage to snatch words with old faces too (hi Bav!) and catch up with some people I’d briefly seen at FantasyCon.

I got to one panel on books that the panellists held dear to their hearts, despite problems; the GOH interview of Joanne Hall by Roz Clarke; and Pete Sutton’s launch of Seven Deadly Swords, which I edited – and is excellent, by the way. Historical thriller. Go read it. Beyond that, I was mostly chatting or chilling or sitting at the stall.

I did get more of a book haul, though! Two freebies from the goodie bags; Journey to the Centre of the Earth and The War of the Worlds from Wordsworth Classics. A copy of The Magicians from the freebie table, along with Stranger of Tempest by Tom Lloyd, The Affinity Bridge by George Mann, Autodrome by Kim Lakin-Smith, and a random copy of Your Favourite Band Cannot Save You by Scotto Moore. 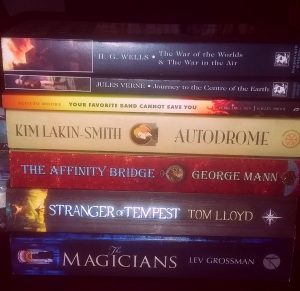 So, congrats and general awesomeness to all the volunteers and organisers – everything seemed to be running smoothly and it was an excellent con! And lovely to see everyone who was there – including all the people I spoke to or met that I haven’t managed to mention!

I’m now absolutely exhausted after two cons in a row plus a busy week at work, so please forgive me if I’m not entirely with it for the next week…or I may just have my nose buried in a book…

Somehow, I got to November, and I have to write wurds…

BristolCon 2017 was fab. I was manning the Grimbold stall for most of the day, assisted by a lot of glamorous assistants – the Grimbold crew are amazing! – and chatted to what felt like everyone. I was on the 10am panel about You Are The Product, which was also fab (and not long enough! We could have talked for the entire day…) and then unfortunately didn’t get to any others, but I heard a lot of people say they were really interesting.

I picked up some books, too – The Court of Broken Knives by Anna Smith-Spark, The Corpse-Rat King by Lee Battersby, The Rise of Io by Wesley Chu and a random copy of The Road to Thule by David R Lee, which from a cursory glance I admit may go in my charity pile (I didn’t buy it, it was randomly in our stock! I suspect from a previous convention freebie table). But hey, I’ll try it, and I’m definitely looking forward to the others.

I’m wondering if I should spend some of December catching up on my reading, and sorting out my Goodreads…I have an entire shelf of books that I haven’t yet got to, along with quite a few on my Kindle! We’ll see how this month goes. 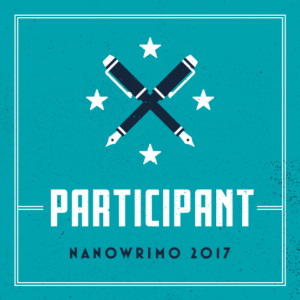 You can find me on the NaNoWriMo site, and there’s still time to join in if the idea of writing a novel in 30 days intrigues you!

In more general news, I have good days and bad days, and I’m not entirely coping with people (as in panic-attack-not-coping-with-people) so if I’m a little quiet, that’s why! I am trying to keep in contact though so I am still online and messaging. Book Polishers is still awesome so I’m just trundling along with work there, trying to get out for some lovely autumn walks, and trying to keep busy. Not that keeping busy is going to be an issue this month!

Now, I need to go write some words….wish me luck!

I’m at BristolCon tomorrow! It’s at the Hilton DoubleTree in Bristol from 9.30, so if you’re in the area, come on in! It’s £30 on the door but well worth it, with a whole mix of panels, readings, authors, deals and general chaos. Hopefully this time won’t include exploding battle chickens, but we can always hope. 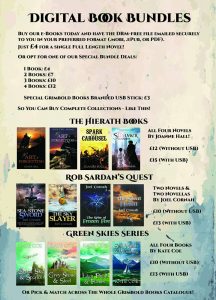 I’m on a panel about ‘You Are The Product’ at 10am – It’s long been said that if something on the Internet is free, then it’s you that’s being sold. In an increasingly social media obsessed world, where every click you make feeds into an algorithm somewhere, maybe we should be concerned about just what companies do with our information. Is this just tinfoil hat paranoia, or could your online life genuinely affect your “real” life, from the billboards you see to your chances of getting insurance? What will this look like in another decade? Another century?

It’s with Gaie Sebold, Adrian Selby, David Gullen, and chaired by the excellent Kevlin Henney. We’ve been having a chat over email about it and have somehow got onto the possibilities of sacrificing kittens and/or puppies instead of goats….so if that’s anything to go by, it’s going to be a fun panel!

You’ll also be able to find Grimbold Books in the Dealer’s Room with lots of lovely deals and books, so come and check us out. I’ll likely have my Bold hat on so should be pretty recognisable, so say hi if you see me!

I went! I saw! I conquered! Well, I sat in the Dealer’s Room and talked to everyone, but I think that counts.

Through a combination of Talking To People and Taking It Easy, I managed to miss seeing any of the panels this year! From what I heard, they were excellent. My first panel was Storming The Castle at 6pm, which got a little insane…genetically-modified mice that turned into fire-breathing dragons got defeated by a fire extinguisher turret and promptly had a foam party. It was that sort of panel. Unfortunately, I had to miss my second – a combination of medical emergencies meant I had to leave, which sucked 🙁 but I heard it was good anyway, so I hope that everyone who went enjoyed it.

The launch of Amunet by Robert Harkness was fun – there was a dramatic reading and then beard-shaving, and cake!

One of many reasons #BristolCon is so fab – they have all the cake! pic.twitter.com/60XQOtvWa4

I did a carrot, apple & raisin cake that was vegan, a chocolate almond cake that was gluten-free, and a victoria sponge – plus cog sugar cookies and chocolate moustaches! You might be able to tell that I like baking.

I talked and met too many people to list, but it was awesome – I also bullied a few of my writers (apparently they don’t like meeting their editor at conventions when the first thing she does is smile sweetly and say “so, how’s the rewrite?”) but hey, it makes ’em write 😉

Halfway through @BristolCon, and having an epic time despite plague, hangovers and editorial chivvying from @hierath77 & @writingandcoe 😉 And I have books! All of the books, mwahahaha. Most were from the freebie table, but I have Autonomy because I want to review it, Silent Cit for another review, and I bought EmbassyTown and In The Land of Giants (which is a non-fic about Saxon Britain and looks really interesting!)

Haven’t yet got my ticket for next year, but I definitely want to go.

Edit: I hear Jo’s stepping down as Chair, so ARGH and EEEH and good luck to everyone all round! I also forgot (I blame Not Enough Tea) to add thanks to everyone there – it was excellently organised as always, and very enjoyable.

So next? Leftover cake for breakfast, a pre-NaNo meetup in Swindon, and lots of reading!

I’m off to BristolCon tomorrow, armed with cake, books and friends! I’ll be on the Grimbold Books table for some of the day, so if you’re planning on visiting then do drop by the Dealer’s Room to say hi. I’ve also got a few official excursions…

Kristell Ink cordially invite you to the launch of Rob Harkess’s steampunk novel Amunet, followed by signings from the convention’s participating authors.

The panellists are the staunch defenders of Castle BristolCon, with its ramparts, crenellations, moat-with-spikes and traps for the unwary conventioneer – can the audience come up with an effective plan for taking the castle?

The late Graham Joyce believed in fairies. He wrote about fairies. He lit candles on his lawn for fairies. But he didn’t like to use the F word (not ‘f**k’. He said ‘f**k’ all the time). He said they didn’t like it, and Graham’s fairies were not people you’d want to cross. “…when the shadow steps out, not only is it sometimes not sweet, but sometimes it stays out…” The panel discusses the darkly numinous otherworld where fairytale meets nightmare.

And the full programme can be found on the BristolCon website. Hope to see you there!