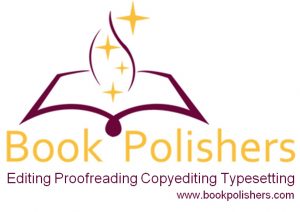 Well, so far, I’m loving the new job! I’ve taken over Book Polishers from the lovely Zoë, who’s (sensibly) gone back to full-time work. I, on the other hand, have opted for part admin (so I have one steady paycheck!), part writing, and part formatting. I’m bringing Scritto Editing in under the Book Polishers roof too – no point having two names for the same thing – and a lot of my private work is also coming under the same name, so I’m sorry for the next few months of confusion to anyone that I’m doing work for! It is all still me, honest.

I’m loving formatting – it definitely satisfies my need for order and just the right place for all the things, in addition to getting to play with fonts. I’m enjoying learning InDesign too! The rest is business as usual, at least where editing and proofreading is concerned – same ol’ same ol’ there!

I’m just finding my feet and my balance, and still getting things set up, but I’m taking work –  so if you have a book or any writing that you need edited, proofread, or anything that you want formatted, check out BookPolishers.com.

I would say that life seems to be going out of its way to screw me over this year, but most of it is my own doing! So, the short version of “What Kate Is Up To THIS Time” – I am…

This was all meant to be happening sometime later when I’d gotten settled a bit more, but the typesetting came up, and I figured it’s worth a go. I’m going to be doing it as an official business, so I’m currently in the midst of setting up a company, bank accounts, software, hardware, all that sort of thing….

I’m part scared, part excited, part just struggling as usual. I had an interesting talk to my friend Sophie when I told her; she was ridiculously excited (although if you haven’t met Sophie, this is her usual state of being) and thought it was brilliant that I was chasing my dream. I just feel like I’ve failed at yet another thing, as I’m quitting a job I wanted to be stable and successful in. The new business is exciting, yes, but it’s really hard for me to see it as a good step. But as usual, my brain’s being a complete moron. It’s a big step, yes, but it is a good one – I was so excited when I found out I’d got the business, and even stupidly complicated tasks like setting up the bank account have been worthwhile. It’s going to be hard and it’s going to be stressful, but it’s going to be both of those in a good way! I’ve got so much to learn, but at the same time, I’ve been realising how much I know already. So it is going to be good 🙂

I’m still around this month (September), planning and packing, but I’ve got the moving van booked and dug the boxes out of the store room, so I will be moving in the second week of October. If anyone’s got any advice, helpful hints, doomsday warnings or bad jokes to brighten the tedium of packing, send ’em over!

I’m still writing and all of that, so everything else is still going. Also, I’ve still got a few more random plans in the works, so I’m afraid I can’t promise that the chaos is over quite yet… *happy Kate dance*