I’m an editor! I was previously a Junior Editor, and my boss has agreed that I have now learned enough to be allowed to advance to editor. It doesn’t absolve me of the responsibility of tempering the Commissioning Editors’ wild flights of fancy, though – usually involving dinosaurs, Romans or pirates… so if you see a theme in the next couple of years, you know what happened! I still feel pretty weird about it (imposter syndrome mixed with “I don’t deserve this” mixed with “I’m not doing well enough”) but… I’ll get used to it, I guess.

DIY! We built a shed and a cat seat, and put up shelves/more shelves/hanging rails/a mirror/different shelves, and put a whole bunch of stuff away… and I’m officially moved in with my partner now, as all my stuff* is over in another house! Still working on it feeling like my place, though. I think that’ll come with more time.** 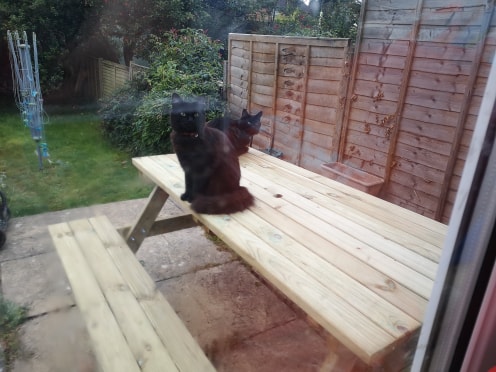 I’ve been challenged to step up my editorial game. It’s always a bit nerve-wracking when someone says “how can I improve?” and I have to find the answer, but this is improving on something that’s already good. So that’s going to be hard work, and tough because there’s no definite way to improve your editing game, but I want to do it.

I’m still feeling a bit grey, but doing better than I was. As my colleague put it, “you’ve got a bit more light in your eyes.” Plus I can pick stuff up (I get very tired when I’m not feeling well) and get out of bed, eat without feeling sick and actually feel again, so it’s still in that strange “wait, I have emotions?! And I can ENJOY food?” period. Hopefully I’ll carry on up for a bit.

On a cooking note, I made soup (I know, I know… but SOUP) and so it’s officially Autumn. It was some weird squash soup too, but it worked. (Butter. That’s the key.)

And something I’ve been listening to: