When You’re Strange: An Anthology of Strangers by the CASFWG 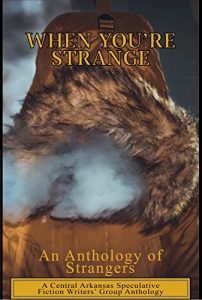 There are things that define us. Things that separate us from the whole. Everyone’s a stranger in some way or another. Whatever the circumstances, strangers are compelling protagonists.

For CASFWG’s third anthology, we present fifteen stories of strangers. From distant planets to rural locals, enjoy the unfamiliar.

This is an anthology of fifteen stories, all dealing with people or things that are somehow…strange. Weird. Different. Unusual. The stories range from traditional fantasy to horror, and the anthology overall is interesting and varied!

Luck of the Draw by Julie Burton is a fantastic, horror-tinged card game where the prizes are beyond your wildest dreams…and the second story, Dead Air by PC Keeler, is as fantastic a story in a different way; a radio debate between those who favour a dying naturally, and those who favour life extension – at a cost. I loved the twist to this one! Always Always by Jennifer Lee Rossman is a thoughtful mix of the divide between the city and country, rich and poor, and how AIs could fit into a world – and the problems they could cause; and Superman Has Left The Building by Tom Howard is a sweet and sad story about superheroes with odd powers – and the decision to use them, or not.

Fire and Water by Megan Neumann is another sweet and sad story, told in letters, about a girl who runs away for love, and her struggles to fit in to her new family and life. Hipsters vs the VCR by Sallie McDaniel was one of my favourites; I loved the play on D’n’D stereotypes in this story! Family Reunion by Tori White starts as family squabbles, ends up as…well, weird…and The Collectors by Lin Christie is short and poignant, a story about life and death.

Convincing Vince by Mike L Lane is a story about a paranormal investigator who goes to investigate a railroad mystery, and it’s wonderfully spooky! The Thief of Merrick by Tabitha Di Giacomo is traditional fantasy style setting, and story about a child thief meeting a stranger.  The Dionesian Wave by Ray Daley is a haunting sci-fi with a horror tinge; Earth has been invaded by aliens and the narrator has gone to their world to learn more about their culture. however there’s a dance they can’t complete…and Guitaria by AP Sessler also has a supernatural tinge, with a boy who plays an invisible guitar, and the day that everyone listens to him…

Alice by Lisa Paul is a mystery that feels like a mix between urban fantasy and fairytale; from an alternate world, an Alice is chasing her partner, who has crossed over into ours…and Devour by Danne Boyd is a fun take on a modern world with a magical twist; sin-eaters and necromancers, and a motive from beyond the grave. The final story, Possession by Sarah Vestal, was a little hard to get into, but is a story about overcoming death with cybernetics, and makes for an interesting end to the anthology.

The stories are all varied, and I love the mix of genres and styles. There isn’t any one story that particularly stands out, but the anthology is worth a read if you’re into strangers with a dash of horror and mystery.