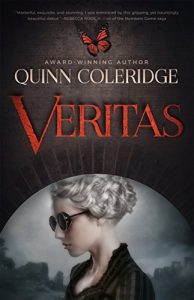 The ghosts are angry, thinking I’ve neglected them. Do not forget us, they call out from the grave. I won’t, I promise them. Upon my life, I won’t.

Being a demigoddess in 1892 Stonehenge, Colorado isn’t all one might suppose, especially when the dead are involved. Yet as Veritas of the Rocky Mountain sovereignty, it is Hester Grayson’s calling to help restless spirits cross over by bringing their killers to justice. Blind and pale as an albino, she dwells on the fringes of the nouveau riche, working with her telepathic beau Tom Craddock to catch the guilty.

When a young woman is brutally murdered, Hester and Tom are determined to solve the case as they have every other. But this one demands more. The killer wears many faces and wields greater magic than even Hester possesses. All sleuthing stops, however, when Tom is gravely wounded and Hester is cast out of her parent’s mansion into the squalor of an asylum.

At the mercy of an insane doctor, surrounded by agitated ghosts, Hester fights to maintain her own sanity by planning her escape and the downfall of her enemies. Can she achieve her goal and expose the madman who sent her to hell? Or will he continue his bloody reign in Stonehenge?

Veritas is a mix of sleuth/detective, ghost story, thriller, horror and romance…I’m not entirely sure where I picked up the recommendation for Veritas, but it’s definitely worth a read!

The story starts with Hester; blind, dumb and living in genteel state with her family. But while she’s treated as a helpless ornament by her mother and despised by her father, Hester herself often tests her limits, both on her own and with allies: her companion Cordelia affectionately assists with many tasks, and her beau and partner Tom stays in constant contact. And Hester also has a secret: she has been chosen by the Lady Veritas, and hears Sir Death. Her remaining senses are supernaturally acute, and she can speak to the spirit world.

But the spirit world does not let her live quietly. Murder victims clamour for revenge, and Death presses Hester to find the killer. In addition, Hester is becoming a target – and a prize. A new doctor in town becomes interested in the lively young woman and frustrated at her circumstances, offering to teach her sign language; and Tom’s position as companion and lover grows ever stronger and more precarious as a rival comes on the scene.

Hester’s voice is wonderful; despite her lack of sight and voice, there’s never any lack of description or action, and we see brilliantly through her extended senses. The setting is small-town America with a side dose of an insane alsylum, chillingly portrayed. The characters are excellent; a wide mix of voices and people, all beautifully brought to life by their movements, voices and affections, even though we are unable to see them. Hester’s relationships, both with her loves and her enemies, is nicely done; the motivations of many characters are complex and interwoven, even though Hester is always the central point. The action is very good and the plot tugs along; there are some very good twists and unexpected events throughout, and it’s never boring.

The one thing that lets the book down, and knocks a star off the rating, is that I felt the enemies were confusing. I struggled to work out who was under suspicion at any particular time; while there is one Big Bad, it’s not clear (intentionally, but confusingly) who is an enemy of Hester’s. This is particularly noticeable with the twist at the end; it doesn’t get foreshadowed, and while that makes it very good as a twist, it doesn’t help clear up the confusion! The murder plots also add to the tangles, and while the victims are clear, any potential links between the murderers aren’t. However, it doesn’t detract from the reading of the book; Hester is always a clear voice, even if the workings behind the scenes aren’t entirely clear.

So, overall; a complex and interesting book with some brilliant characters and a unique central protagonist.