Under The Pendulum Sun by Jeannette Ng 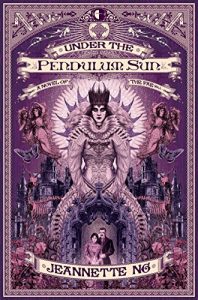 Catherine Helstone’s brother, Laon, has disappeared in Arcadia, legendary land of the magical fae. Desperate for news of him, she makes the perilous journey, but once there, she finds herself alone and isolated in the sinister house of Gethsemane. At last there comes news: her beloved brother is riding to be reunited with her soon, but the Queen of the Fae and her maniacal court are hard on his heels.

Weird, eerie and definitely gripping – a mix of horror, mystery, fantasy and Victorian gothic come together to make an unsettling and evocative read.

Catherine Helstone’s brother, Leon, is a missionary to the incredible land of Arcadia – the land of the Fae, discovered only by getting lost. Leon has been sent out to replace the previous missionary and bring Christianity to the strange land, but his letters have been sporadic and strange. Cathy has been offered the chance to travel out to see him – and see the land of the Fae.

But when she reaches Gethsemane, a strange house in the middle of foggy moors, she finds Leon missing, their manservant full of strange questions and fierce faith, and a house riddled with questions – all under a swinging, pendulum sun and a angler-fish moon that roves the sky. She dreams of Leon in the arms of a Fae woman and struggles to decipher the diaries of the previous missionary, as well as exploring the grounds and uncovering the mysteries of the half-Fae, half-human Changeling who is her companion at the house…

And then Leon returns, and brings with him the Pale Queen, her Court, and her flurry of mysteries…

I loved the developing tension and relationship between Leon and Cathy; so familiar and yet so alien, and the unsettling twists in the second half of the book are woven expertly from the threads played at the start. The mysteries all overlap with brilliant horror, and the strangeness of the Fae overlaps with the unknowns of their surroundings in Arcadia; the theological puzzles mix with the mysteries of the previous missionary and his diaries; and the Pale Queen’s manipulations and games wind around Leon and Catherine’s own relationships, both with each other and with the others around them.

If you’re into eerie fantasy mixed with horror, this is definitely worth a read.