Thornbound by Stephanie Burgis (Book 2 of the Harwood Spellbook) 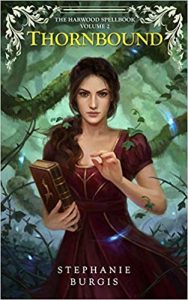 The first volume is Snowspelled, which I reviewed here.

Cassandra Harwood scandalized her nation when she became the first woman magician in Angland. Now, she’s ready to teach a whole new generation of bright young women at her radical new school, the Thornfell College of Magic…Until a sinister fey altar is discovered in the school library, the ruling Boudiccate sends a delegation to shut down Thornfell, and Cassandra’s own husband is torn away from her.

As malevolent vines slither in from the forest and ruthless politicians scheme against her, Cassandra must fight the greatest battle of her life to save her love, her school, and the future of the young women of Angland.

Jane Austen meets magic, with a wonderful dose of powerful characters! In the same vein as The Invisible Library, Lady Isabella Trent and the amazing The Midnight Queen from Sylvia Izzo Hunter…and just as fabulous.

The first book was light-hearted, magical, character-full, interesting and enjoyable, and this one continues! Cassandra has got her man; but he’s being sent running all over the country by his job; and Cassandra’s set up her school of magic, with all the challenges that brings. And now the students are arriving, along with the  teachers, and the inspectors, and a whole boatload of trouble…

I think this could be a standalone, but it’s probably worth reading Snowspelled first to pick up the characters; the backstory to Cassandra, Wrexham and Amy is worth knowing (they’re so cute!) and definitely lends more to the story. However, a new school, with Cassandra doing her best to corral students and staff while trying to figure out who’s calling the Fey into events, warn teachers from wandering off into the bluebell woods, and dealing with two inspectors who would be very pleased to see the school shut down… it all makes a wonderfully enthralling story, and is as fun as the first!

There’s a short story (published in The Underwater Ballroom Society) and also apparently another novella coming (with more Miss Banks and Miss Fennell, yes!) and I’m thoroughly looking forward to any future stories in the series.