This Savage Song by VE Schwab 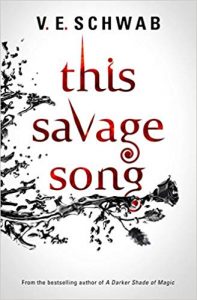 Kate Harker and August Flynn are the heirs to a divided city, a grisly metropolis where the violence has begun to create real and deadly monsters. All Kate wants is to be as ruthless as her father, who lets the monsters roam free and makes the inhabitants pay for his protection. August just wants to be human, as good-hearted as his own father but his curse is to be what the humans fear. The thin truce that keeps the Harker and Flynn families at peace is crumbling, and an assassination attempt forces Kate and August into a tenuous alliance. But how long will they survive in a city where no one is safe and monsters are real…

A teenage coming-of age combined with a world where monsters come out of violent acts, and now the city is split – one half controlled by the Flynns and the other by the Harkers, and both with monsters that roam…

The world-building is really well done; definitely a future but one that is disconcertingly similar. I liked the characters; August, who just wants to play his violin… his character came through very clearly, a monster who just wants to be human, but can’t help being a monster. Kate is more of a difficult one, but her background came through well, and her relationship with her father was interesting – along with her relationships with her schoolmates! I loved the rationale behind the creation of the monsters, too, and finding out about August’s past added a lot of both creepiness and sympathy to him.

The plot was fast-paced enough to keep me interested, and it’s got some nice twists – some aspects are predictable but I did like the lack of cliched romance (sorry, slight spoiler – but the twist on that is a good one, so you’ll forgive me) and the reveal at the end. It’s the first of a trilogy but does end on enough of a satisfying conclusion that I don’t feel I’m missing out if I don’t manage to pick the second up immediately.

So, a good read if you’re into YA and modern urban fantasy/dystopia!