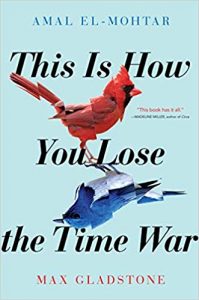 One of the problems of working for a publisher is that I get to read books about, oooh, a year – or more! – before everyone else. This is one of the ones I read, and I couldn’t talk about it until it was officially a bit more Announced… and now it is!

The sort-of-downside is that we’re not publishing it for various reasons, but! That means that I can officially squeak about it being AMAZING and BEAUTIFUL and OHMYGOODNESS BUY THIS BOOK without looking at all partisan.

So I am going to tell you that it is AMAZING and BEAUTIFUL and OHMYGOODNESS BUY THIS BOOK.

Among the ashes of a dying world, an agent of the Commandant finds a letter. It reads: Burn before reading.

Thus begins an unlikely correspondence between two rival agents hellbent on securing the best possible future for their warring factions. Now, what began as a taunt, a battlefield boast, grows into something more. Something epic. Something romantic. Something that could change the past and the future.

Except the discovery of their bond would mean death for each of them. There’s still a war going on, after all. And someone has to win that war. That’s how war works. Right?

I adore the lyricism of the language and the poetry of the letters; I adore the twist in the tale, and the steps they take to get there; I adore all the scenarios of this time war, the knots and whorls and the locations of assignments, and the tiny, weird things that make such a difference downstream; I adore the rapid-fire action and the slow build of the romance; and it’s just…

Put it this way, I’m buying myself a copy and buying another one for Otter because they will love the language, and then handing my copy round my entire family and probably half my friends and telling them all to GO BUY ONE.

It’s beautiful, haunting, clever, enthralling and stunning; I love it, and it’s a wonderful story. Get this.