The Wizard’s Daughter by Jeff Minerd 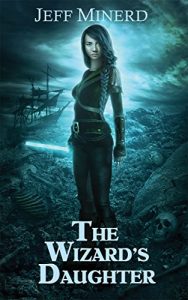 Sixteen-year-old Brieze is the apprentice and adopted daughter of a powerful wizard. She never met her biological father, a merchantman from the faraway Eastern Kingdoms who had a brief romance with her mother, then disappeared. When Brieze discovers her mother is still secretly, crazily in love with this man, even after seventeen years, she decides to find
him, confront him, and get some answers from him for her mother’s sake.

In her small airship the Devious, she makes the long and dangerous journey to the Eastern Kingdoms. Along the way, she confronts pirates and the nocturnal ship-crushing beast known as the Nagmor. She survives a harrowing trip through the legendary Wind’s Teeth. She discovers why her father disappeared, and in the process she learns the true
version of her own story.

When Brieze’s boyfriend, Tak, receives word she’s in danger, he sets out on his own journey east to help her. Will he be able to rescue her, or will she end up having to rescue him?

I was lucky enough to get an ARC of this from Jeff as I’d read The Sailweaver’s Son and reviewed it over at SFFWorld. This is the second in a projected three (I think?) – certainly it ends on something of a cliffhanger, so we’re certainly set up for another one!

While the last book focused on Tak, this one is firmly about Brieze (albeit there is some storyline that follows Tak, now training to be a soldier.) The wizard’s apprentice has decided to find her father, and I adore her – well, basically, pig-headed stubbornness that means she’s going to do it, no matter what anyone else says! The characterisation throughout the book is lovely, and Brieze’s stubbornness, independence and sheer character comes through well. My favourite part was probably her trying to sneak out of the Palace, but fighting the Nagmor was a close second.

The atmosphere and worldbuilding is very good, and I loved the Wind’s Teeth, along with the cities; the characters are also entertaining, and the story rattles along at a nice pace. Tak’s arc, while brief, gives a nod to PTSD and the stupidity of young love;  and Brieze finds some of her answers while getting more questions – and everything gets pushed along nicely for the third book, which I hope will give both characters some interesting conclusions!

In short; if you like a mix of epic fantasy and steampunk in a world with floating ships, goblins, sky-monsters, pirates, wizards and very stubborn heroines, then read The Sailweaver’s Son, and then read this!