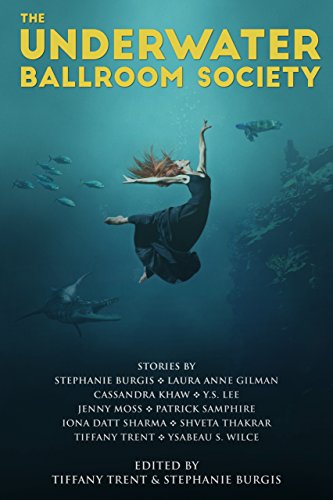 Would you rather dance beneath the waves or hide your smuggled magic there? Welcome to a world of sparkling adult fantasy and science fiction stories edited by Stephanie Burgis and Tiffany Trent and featuring underwater ballrooms of one sort or another, from a 1930s ballroom to a Martian hotel to a grand rock ‘n roll ball held in the heart of Faery itself.

This anthology is a collection of wonderful stories – all with a nod to an underwater ballroom. I was lucky enough to be given an ARC in exchange for an honest review, and I can truthfully say that I absolutely adore this collection!

The first story, Ysabeau S. Wilce’s “The Queen of Life” is great fun; a mix of fairy tales and myths, and rock’n’roll! loved the twists and turns of this, and it’s got a really upbeat vibe. Y.S. Lee’s “Twelve Sisters” is a wonderful take on what happens next after the soldier solves the mystery of the princess’ worn-out shoes and midnight dancing…and also provides a haunting woven-in story that gives more depth to the fairytale, and shows us more of the princesses. Iona Datt Sharma’s “Penhallow Amid Passing Things” involves smugglers, Revenue inspectors, magic, illicit goods, adventure…I loved the relationships and characters woven into this, and I’d love to see more of the wider world in a longer story even though this story itself is an excellent read in its own right!

Tiffany Trent’s “Mermaids, Singing” puts us into Victorian England, with mudlarks on the banks of the Thames, a freakshow circus with real creatures…and a captured shapeshifter with no memories and a chance to escape. The story’s very well-written and the period comes through nicely, but I thought the motivations could have been laid out a bit more clearly; I did struggle to understand why some of the characters were acting as they did, but loved the weaving of Victorian London into the strangeness of another world. Jenny Moss’ “A Brand New Thing” is a change of tone again, with a sweet, fairy-tale like quality; a girl who loves to read, who doesn’t quite fit in, and who is given a key to a dream world…and Cassandra Khaw’s “Four Revelations from the Rusalka Ball” was my favourite; short, sweet, lyrical and evocative, mixing fairytale and darker myths.

“Spellswept” by Stephanie Burgis is an even better read if you’ve read her novel “Snowspelled”, but it’s a great short! It’s Regency with magic, and a family who dare to challenge the way things are done – for the best reasons. Laura Anne Gilman’s “The River Always Wins” is a mix of grunge, punk, anger, dance, memories, with a nice dash of weird thrown in: I love how she’s conjured up the emotions, the mix of anger and no-fucks with the sinking feeling of growing up, becoming boring, until everything’s stirred up again…Shveta Thakrar’s “The Amethyst Deceiver” was the one sour note for me; the story is excellent and well-written and I loved the setting (1920’s vibe with added weird!) but I didn’t entirely understand the point of the plot & events; while the story itself makes sense, I felt the character motivations were harder to understand. It certainly doesn’t detract from the read though! And the final story, Patrick Samphire’s “A Spy in the Deep” is a turn-of-the-century adventuring plus Martian sci-fi mix; a new spy-in-training is given a tough assignment, with a couple of problems thrown into the mix including a fellow-trainee who doesn’t like her, a bumbling brother-in-law, and an unfortunately timed murder…

The whole collection is a wonderful, changeable mix of genres, storytelling styles, characters and vibes; I love the central thread of the underwater ballroom – never overtly stressed but always present – and how every author has turned that into something with such a different tone and place. The anthology is wonderful, and well worth a read!

Available on Amazon, Kobo and Smashwords.

One thought on “Review: The Underwater Ballroom Society”