The Strange Case of the Alchemist’s Daughter by Theodora Goss 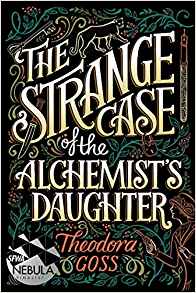 Mary Jekyll, alone and penniless following her parents’ death, is curious about the secrets of her father’s mysterious past. One clue in particular hints that Edward Hyde, her father’s former friend and a murderer, may be nearby, and there is a reward for information leading to his capture…a reward that would solve all of her immediate financial woes.

But her hunt leads her to Hyde’s daughter, Diana, a feral child left to be raised by nuns. With the assistance of Sherlock Holmes and Dr. Watson, Mary continues her search for the elusive Hyde, and soon befriends more women, all of whom have been created through terrifying experimentation: Beatrice Rappaccini, Catherin Moreau, and Justine Frankenstein.

When their investigations lead them to the discovery of a secret society of immoral and power-crazed scientists, the horrors of their past return. Now it is up to the monsters to finally triumph over the monstrous.

This is ridiculous amounts of fun! If you like The Invisible Library, Gail Carriger’s Finishing School series, Phil & Kaja Foglio’s Girl Genius series, or any of the Sherlock Holmes adaptions… you’ll love this.

The story starts with Mary Jekyll having to lay off the servants: her mother having just died, the money has run out, and she’s not sure what to do next… until she gets an intriguing message about money being paid to a charitable fund, and discovers that she has a sister whose surname is Hyde…

And that’s just the start. Mary and Diana start collecting allies – and friends. The Poisonous Woman, The Puma Turned Human, and the Giantess – humans created by scientists trying to push the boundaries of knowledge, and possibly working for a mysterious society. But pushing the boundaries of knowledge can lead to people getting hurt – and creations that cause harm. Aided by Sherlock Holmes and Dr Watson, the Athena Club – as they name themselves – are on the trail of those who don’t consider the human cost of their experiments…

The book is a lot of fun; the interactions between the members are easy and amusing, and I love the little asides in the text as they tell the stories, each interjecting some detail or argument. It’s a wonderful piece of character building that adds to the story, and is great fun as you read more and are introduced to the characters! I also loved the literary details that get tugged in. The story is fast-paced, rattling onwards – it never takes itself too seriously, and it’s an action-filled romp with some seriously kick-ass – and thoughtful – heroines who display a wonderful range of character and a heart-warming rapport.

The series continues with European Travel For The Monstrous Gentlewoman, which sees the Athena Club tracking down van Helsing’s daughter and meeting some old friends… as well as some old – and new – enemies!