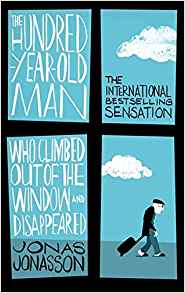 Sitting quietly in his room in an old people’s home, Allan Karlsson is waiting for a party he doesn’t want to begin. His one-hundredth birthday party to be precise. The Mayor will be there. The press will be there. But, as it turns out, Allan will not . . .

Escaping (in his slippers) through his bedroom window, into the flowerbed, Allan makes his getaway. And so begins his picaresque and unlikely journey involving criminals, several murders, a suitcase full of cash, and incompetent police. As his escapades unfold, Allan’s earlier life is revealed. A life in which – remarkably – he played a key role behind the scenes in some of the momentous events of the twentieth century.

I was talking to a friend about this, and told them the title. They said, “So…let me guess, it’s about a hundred-year-old man who climbed out of a window and disappeared?”

“Yes! Except there’s an elephant. And he met Stalin.”

And it is great! It’s ridiculous, enthusiastic, cheerful and strange, and I loved it!

The story is basically what it says on the tin, except so, so much more! It’s a cross between a historical narrative, told from the point of view of an apolitical Swede who manages to amble his way into various major political situations – mostly on account of having blown things up previously – and then cheerfully ambles his way out; and a modern-day mystery crossed with a heist of sorts, as Allan walks off with a suitcase and various people try to work out where both Allan, the suitcase, and subsequent other missing people have got to…

And there’s an elephant. She’s great.

The tone is chatty, friendly and very easy to read; the characters are full of interest, likeable and varying widely. I loved the way that the historical and modern stories wove together, and while they don’t exactly feed into one another, Allan remains as the central figure.

It’s an easy, fun and amusing read that mixes modern-day mystery, historical fiction and a cheerful story about unlikely friendships, and it’s the perfect rainy-day book!