The Haunting of Tyler May by BJ Mears 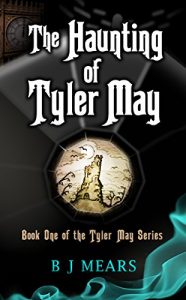 As Tyler May empties her classmate’s bag she discovers a secret that turns her life upside down and challenges her perception of the known world. She begins a journey that takes her from the hunted to the hunter; from a disbeliever to the keeper of the truth. Will she and her friends have the courage to stand together and face the sinister forces that threaten humanity? As each day passes, Tyler must decide how far she is willing to go. After all, she is just one teenage (girl.

This is the first in a series of a YA, horror-mixed-with-adventure type thing…and I liked it! I’m not entirely sure I’m the right audience, and the second book is on my TBR (but not at the top), but – it was a fun read!

The basic plot is that Tyler accidentally gets her classmate’s bag, finds a mysterious book and a bunch of notes, finds an odd gadget…and finds a world of trouble! Tyler’s a fun heroine; she manages to get herself into trouble without entirely meaning to but still definitely knowing she’s heading in that direction, and the mix of frustration, stubbornness and morality makes her a fun protagonist to follow. I liked the hints of Tyler’s frustrations mixed into her adventures; she needs to make lists, needs to be ordered – and still wants to go hunt the bad guys!

I admit to not being entirely sure about her enemies…I tend to get cynical about Nazis as baddies, but I was fairly happy to mentally give it a pass. It’s meant to be a fun adventure romp, and I think baddies get a pass to be Bad in that scenario. Certainly they make effective – and fun – adversaries, and the helpers (and hinderers) that Tyler meets along the way add to the cast.

On which note, I love the gadget that Tyler uses – there’s a whole bunch of different functions, a rabble of ghosts, and I love the inventiveness of Tyler’s use of it! The Tower was definitely my favourite.

So; a fun, horror-tinged story that features a stubborn, strong-willed and adventurous heroine, a plot-full of baddies, and some great characters. Worth a read if you’re a teenager, or it sounds like fun – and there’s the rest of the series if you like it!