The Court of Broken Knives by Anna Smith-Spark 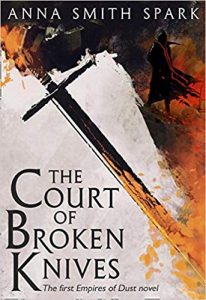 They’ve finally looked at the graveyard of our Empire with open eyes. They’re fools and madmen and like the art of war. And their children go hungry while we piss gold and jewels into the dust.

In the richest empire the world has ever known, the city of Sorlost has always stood, eternal and unconquered. But in a city of dreams governed by an imposturous Emperor, decadence has become the true ruler, and has blinded its inhabitants to their vulnerability. The empire is on the verge of invasion – and only one man can see it.

Haunted by dreams of the empire’s demise, Orhan Emmereth has decided to act. On his orders, a company of soldiers cross the desert to reach the city. Once they enter the Palace, they have one mission: kill the Emperor, then all those who remain. Only from ashes can a new empire be built.

The company is a group of good, ordinary soldiers, for whom this is a mission like any other. But the strange boy Marith who walks among them is no ordinary soldier. Marching on Sorlost, Marith thinks he is running away from the past which haunts him. But in the Golden City, his destiny awaits him – beautiful, bloody, and more terrible than anyone could have foreseen.

This has taken me so long!! Partly because I got the hardback and it meant I couldn’t really carry it anywhere, partly because I had a ridiculous book-stack, and partly because…well, it’s grimdark, which is not my favourite genre.

The story itself is interesting and tangled, but easy to read; it switches between the soldiers in the desert (who include Marith) and various players in Sorlost… and then when the soldiers arrive, things get political. And bloody.

Basically, everything goes wrong for everyone. (It is grimdark.)

The thing I liked about The Court of Broken Knives was the characters; addiction and innocence are shown in the same sentence. Lust and greed are tangled with hope. The situations are horrible (and mostly of the characters’ own making) but how they deal with them shows off the worst and the best of human nature.

The plot is nicely dramatic; blood, drama, politics… Marith realises he can’t hide who he is, and I love Thalia’s arc from Temple Priestess to…well, no spoilers, go read. The politics of Sorlost are brilliant too, with a coup and the realisation that maybe the result of that coup hasn’t actually made anything better at all.