The City of Woven Streets by Emmi Itäranta 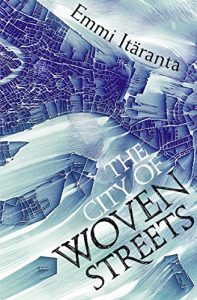 The tapestry of life may be more fragile than it seems: pull one thread, and all will unravel.

In the City of Woven Streets, human life has little value. You practice a craft to keep you alive, or you are an outcast, unwanted and tainted. Eliana is a young weaver in the House of Webs, but secretly knows she doesn’t really belong there. She is hiding a shameful birth defect that would, if anyone knew about it, land her in the House of the Tainted, a prison for those whose very existence is considered a curse.

When an unknown woman with her tongue cut off and Eliana’s name tattooed on her skin arrives at the House of Webs, Eliana discovers an invisible network of power behind the city’s facade. All the while, the sea is clawing the shores and the streets are slowly drowning.

Just wow. If you like lyrical poetry, beautiful imagery, stunning worldbuilding and a tense mystery, read this. It’s been compared to Ishiguro’s Never Let Me Go, but I think it’s closer to Margrét Helgadóttir in the lyricism, Mieville in the worldbuilding – it’s strange, alien and familiar, set on an island where the sea is rising and the Tower stands tall. The House of Webs endlessly weaves and re-weaves their maze-path, and Eliana walks the corridors to make sure nothing lurks in the darkness of dreams.

But if you suffer from nightmares – if they crouch on your chest and try to show you another future in the night – then you are outcast, sent to the House of the Tainted. The nightmares are a sign of a threat, a plague that is spreading through the Islands again – and the Council are doing everything in their power to stop it.

But the appearance of the unknown woman, attacked and bleeding in the Weaver’s courtyard with no tongue, no name and no record, is a mystery that shouldn’t happen. And the name on her palm – a name that Eliana shouldn’t be able to read, and one that has only been given to her – is a mystery that will take Eliana down a path of strange weavers, inks and tattoos, maps and books, and eventually to some of  the secrets of the Island itself, even as the waves rise higher and higher.

The thing I loved most about this story was the detail; it’s the normalcy of a life that is so strangely woven. I loved the relationships and conversations, and the way that everything weaves together by the end. It’s a beautiful read and a wonderful story.

I have picked up Memory of Water, and I’m looking forward to it! But definitely worth picking The City of Woven Streets up.