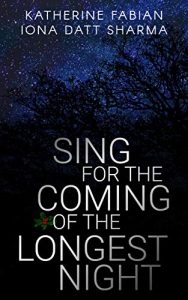 The world you know is underneath the substance of another, with cracks in the firmament that let the light of its magic in…

Layla and Nat have nothing in common but their boyfriend – enigmatic, brilliant Meraud – and their deep mutual dislike. But when Meraud disappears after an ambitious magical experiment goes wrong, they may be the only ones who can follow the trail of cryptic clues that will bring him safely home.

To return Meraud to this world, the two of them will confront every obstacle: the magic of the wild unknowable, a friendly vicar who’s only concerned for their spiritual wellbeing, and even the Thames Water helpline. All of which would be doable, if only they didn’t have to do it together.

But the winter solstice is fast approaching – and once the year turns, Meraud will be lost forever. In this joyously queer novella, Nat and Layla must find a way to overcome their differences before it’s too late.

So, basically, it’s a story about following a trail of clues; Meraud has done something stupid, and his lovers have to follow a trail of very Meraud-like clues to get all the pieces they need to try to bring him back. In the process, they have to work together – and navigate actually finding the bloody clues from wherever Meraud has hidden them…and despite the fact that Meraud isn’t really a present character in most of the story due to being, well, missing, he’s most definitely the heart and centre of the book, and one of the more frustrating characters! For us as well as for Nat and Layla, I feel…

The book overall is a light and fairly easy read; described as “joyously queer” – it is! It’s fabulous and complex, with bisexual and polyamorous relationships overlapping and weaving around children, adulthood, friendships and new families; but to call it queer leaves out so much of the tapestry of normality that makes this book so rich. Religion of all types crosses with magic; adult life overlaps with children, growing up overlaps with past memories and traumas; fairyland overlaps with reality and history; and the personalities of all of the characters weave in and out of each other to make the story so much deeper. But the thing that really makes this book so compelling and joyous is the personalities, the friendships and the relationships and the people;  the love and the tenderness; the problems and the conflicts and the way you can just hear Nat thinking, “For fuck’s sake, Meraud…”

It’s a story about finding someone – but it’s a story about finding other people, too, and learning to live with the tendrils of love that spread; working together to make relationships work, amongst life and children and growing and someone doing something really stupid, Meraud… and overall, it’s a gentle, magical, joyous and utterly queer story.