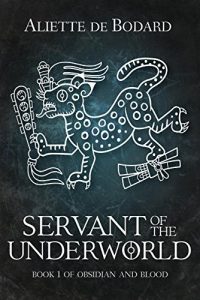 Year One-Knife, Tenochtitlan the capital of the Aztecs. Human sacrifice and the magic of the living blood are the only things keeping the sun in the sky and the earth fertile.

A Priestess disappears from an empty room drenched in blood. It should be a usual investigation for Acatl, High Priest of the Dead–except that his estranged brother is involved, and the the more he digs, the deeper he is drawn into the political and magical intrigues of noblemen, soldiers, and priests-and of the gods themselves…

This is complex, political, historical, thrilling, tense and at times infuriating. I love the mix of characters, the unusual setting with so many woven details and strange magics, and the sheer mix of alien-ness and familiarity of the world.

Also Acatl is so grumpy! I love it.

There’s a lot of interesting twists of plot; the story is a murder mystery plus political twists, and it’s relatively easy to follow but also obscure enough to not guess. The murder-mystery strand runs throughout, which I liked, and we slowly learn more about all the characters involved – from the arrogant and fierce members of the Jaguar Knights to the quieter, devoted members of the temples and the students and teachers of the calmecac. I also really liked the mixture of godly realms, magic and earthly life: magic is used relatively casually & woven into the fabric of the world and the novel, and I love the subtlety of it as well as the moments where it stands out and (sometimes) saves the day.

It’s also really interesting and a breath of fresh air to read a different culture than standard European, and I love that the author has taken a relatively unknown period and created a world that is both fantastic and relatively true to what sources we have. I definitely enjoyed the explanations at the end: it was interesting to hear why that period was picked and the influences on the book, and appreciate some of the difficulties in setting a historical-inspired novel in a period with such a lack of unbiased – and, indeed, many – sources. It’s a world that’s beautifully brought to life, and weaves in beautifully with the plot.

I’m definitely getting the second in this series, and the third’s on my reading list!