Not In Use For Navigation: Thirteen Stories by Iona Datt Sharma 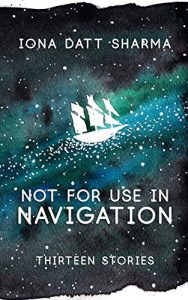 The bell, the lantern, the witching hour…

A refugee arrives from elsewhere in time; a generation ship makes landfall; a vast galactic empire settles to the business of government. Tarot readers find hope in the cards; witches live through the aftermath of war; and Indian mothers think it’s high time you were married. Here are thirteen stories of love and queerness, hope and decolonisation, and the inevitability of change.

Iona Datt Sharma is a writer that I came across through The Underwater Ballroom Society, and also did Sing For The Coming Of The Longest Night. When she emailed to ask if I’d like a review copy of her latest collection of short stories – YES!!

The collection overall is lovely; it’s a woven mix of thoughtful, sweet and amusing stories that all vary wildly, but all have a thread of wonderful characters and detail-orientated worldbuilding running through them.

Light, Like A Candle Flame; actually, this story was my least favourite! It’s a sweet story about a council member trying to make changes aboard a ship, but it felt a bit too abstract for me to get into. However, the second story, Death Comes To Elisha, tugged me back into the collection – a bit of a different take on Death visiting after being drawn in a Tarot deck!

Akbar And The Crows is the first of a collection of sweet and thoughtful stories about an emperor and their woes – more akin to moral tales than stories, and very much in the vein of A Thousand And One Nights etc. Birbal And The Sadhu is the second story, and this one is clever; I love the sci-fi twist on an old tale, and the idea that there are some things you never forget! (Not saying more because spoilers, but it’s worth a read.) The third is Akbar’s Holiday, which is a lovely take on the wronged spouse taking their favourite thing with them; Akbar Learns To Read And Write is a nice version of “what goes around, comes around” in the doing of favours and the idea that maybe everyone should be doing the things they long to do, even if they’re not necessarily very good at them; and enjoyment means more to life than ticks in boxes.

One-Day Listing is a bit weird, honestly; I love that the story doesn’t tell you much about the world and lets you figure it out for yourself, but I could have done with a bit more detail! It’s a story about mental health and coping strategies and alien worlds and justice and adapting, and it’s got a lot of nice detail woven through. I also wasn’t entirely sure about Landfall (your shadow at evening, rising to meet you); this made me think of the Lady Astronaut Books, with The Calculating Stars and The Fated Sky and definitely The Lady Astronaut of Mars. It’s a short story about the people living on Mars, and their quest for more people – but also the grumpy first pioneer, looking back at Earth, grouching through their days and thoroughly enjoying it – for all that the story is more of a vignette, the characters are wonderful! Alnwick was another odd one; it’s almost half a story. It starts with a pod of supplies that’s crashed on launch, and following the investigator; again, another character study and almost half a story, which definitely works – but I’d like to see more of it.

Flightcraft – I loved this! It’s a story about a new arrival meeting a local engineer of a new type of plane, and helping her work; but when an accident happens, more is revealed than either of them want to be… I want to see more in this world; I want another story about what happened next, or something else in the same vein. I love the fact that the engineering doesn’t really get explained, but they know what’s going on; I love the relationships between the characters and the unspoken history, both of the people and of the country/world. It’s a lovely story. I also adored Archana and Chandni – it’s an Indian wedding with The Aunts and all the usual wedding stress plus one of the siblings is an AI; I ended up quoting bits of this one and giggling, and I adore the idea of “so when are you getting married and having children, na?” that involves a spaceship. “What, you think I’ll meet a planteoid with prospects?”

Nine Thousand Hours – I thought I’d read this one before, and it’s come back to me where I did; Strange Horizons! It’s a story in the Salt universe, with magic powers in something resembling our world. Nine Thousand Hours is the story of someone who has managed to remove all writing, and broken the world with it – and how they strive to get it back. The second Salt story is Quarter Days, which I think is actually closer to a novelette or novella;  it made me think of Emma Newman’s Split Worlds series, and I really like that we get to see more of the Salt magic! The three central characters are summoned to investigate an accident with a train, where the magic signal system has apparently gone wrong – but there are racial and magic tensions in the city, a new apprentice to worry about, and Ned lost his magic during the War; I love the little nods to outside events and tensions, the mix of daily life and magic and wider politics. It’s a wonderful world and system, and the story is both sweet and tense.

Eight Cities is again, almost a character study; two old friends, one of whom now teaches, the other who has come to visit – and their current lives, their world’s distrust of science, and the gentle pace of their lives as they try to build understanding. Ur is similar, but it’s a story of cultures – of an alien and a human culture, living together, and the steps they take to understand each other. I liked the small details in this, and it’s definitely worth a read; I found bits of it stayed with me after I’d finished. And the final story is Refugee, or, a nine-item representative inventory of a better world; this one makes you focus on the story to understand it, and leaves more questions than it answers – but it’s an interesting story of a refugee fleeing from their world, and then returning.

Out of all the stories, I adore the Salt world – I don’t know if there are more stories, but I’m definitely going to look into it! Flightcraft is also a world I’d love to see expanded, and Archana and Chandni was my favourite in terms of one-offs; but the whole collection is thoughtful and sweet, filled with characters that spark and worlds that shine, and definitely worth picking up for those odd five minutes of reading time.