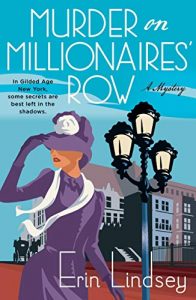 Rose Gallagher might dream of bigger things, but she’s content enough with her life as a housemaid. After all, it’s not every girl from Five Points who gets to spend her days in a posh Fifth Avenue brownstone, even if only to sweep its floors. But all that changes on the day her boss, Mr. Thomas Wiltshire, disappears. Rose is certain Mr. Wiltshire is in trouble, but the police treat his disappearance as nothing more than the whims of a rich young man behaving badly. Meanwhile, the friend who reported him missing is suspiciously unhelpful. With nowhere left to turn, Rose takes it upon herself to find her handsome young employer.

The investigation takes her from the marble palaces of Fifth Avenue to the sordid streets of Five Points. When a ghostly apparition accosts her on the street, Rose begins to realize that the world around her isn’t at all as it seems—and her place in it is about to change forever.

Put it this way; I’ve got the second book on pre-order…

It’s a fun, period-piece romp with a very readable central character, and some fun situations and scenarios! The magic slides in fairly slowly, so it doesn’t feel like a slap in the face; we learn along with Rose, and definitely appreciate her worries and problems with it. The antagonists are nicely done, as is the plot, which is complex enough to stay interesting but simple enough that I didn’t have to focus too hard!

The only character that I felt was a little vague was actually Mr Wiltshire; but then I’m not entirely sure what I did expect, as Rose goes from having a crush on him to being a partner in crime, as it were. I liked the worldbuilding, even though I don’t really know New York at all – there was a helpful little map at the start, and everywhere was nicely sketched out. I liked the historical details as well, which were woven nicely into the plot.

Overall: Miss Marple if she was twenty-something, in New York and had added magic – a light, easy and fun read!