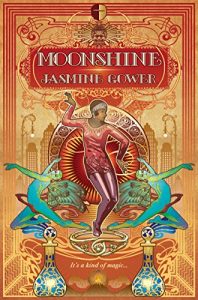 In the flourishing metropolis of Soot City (a warped version of 1920s Chicago), progressive ideals reign and the old ways of magic and liquid mana are forbidden. Daisy Dell is a Modern Girl – stylish, educated and independent – keen to establish herself in the city but reluctant to give up the taboo magic inherited from her grandmother.

Her new job takes her to unexpected places, and she gets more attention than she had hoped for. When bounty hunters start combing the city for magicians, Daisy must decide whether to stay with her new employer – even if it means revealing the grim source of her occult powers.

Very nicely captures the 1920s air; the new women wanting to work, going out drinking and dancing, playing games and cards – and drinking is a taboo pleasure found in underground bars.

And when Daisy’s new employer turns out to be a bootleg creator of mana, everything gets that little bit more complicated…

The political and social aspects of the city are woven together very nicely, and the everyday working lives and party lifestyles of the characters contrast well; Daisy’s small flat and I-bought-this-in-a-charity-bin dress don’t matter when she’s partying with the smart set, gambling and drinking. She’s a fun heroine; resourceful, smart, a new girl making her own way – and someone with their own secrets to hide; secrets that end up holding a rather more deadly secret of their own making. The simple administrative job ends up catching everyone around her in a web involving gambling, secrets, faeries, assassins – and murder.

Moonshine didn’t catch my imagination as I’d hoped it would; it’s well written and captures the world nicely, but my overwhelming feel for the book is of character tangles rather than the Roaring Twenties, which is a shame. The characters are nicely rounded and there’s some fun moments, and the plot rattles along with some interesting bumps. I’m hoping there will be a second in the series – it would be nice to see some of the wider world and more of the effects of the discoveries from the first book, if they do end up echoing out at all.

So, a nice concept and well-written, but not one that grabbed my imagination.