In The Vanishers’ Palace by Aliette de Bodard 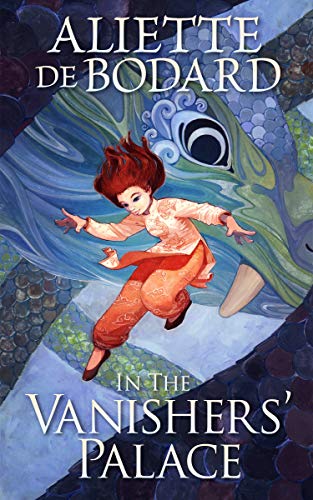 In a ruined, devastated world, where the earth is poisoned and beings of nightmares roam the land…

A woman, betrayed, terrified, sold into indenture to pay her village’s debts and struggling to survive in a spirit world.

A dragon, among the last of her kind, cold and aloof but desperately trying to make a difference.

When failed scholar Yên is sold to Vu Côn, one of the last dragons walking the earth, she expects to be tortured or killed for Vu Côn’s amusement.

But Vu Côn, it turns out, has a use for Yên: she needs a scholar to tutor her two unruly children. She takes Yên back to her home, a vast, vertiginous palace-prison where every door can lead to death. Vu Côn seems stern and unbending, but as the days pass Yên comes to see her kinder and caring side. She finds herself dangerously attracted to the dragon who is her master and jailer. In the end, Yên will have to decide where her own happiness lies—and whether it will survive the revelation of Vu Côn’s dark, unspeakable secrets…

Unsettling, sweet, disconcerting, thoughtful and weird…a mix of sci-fi and classic fantasy, with an interesting and complex protagonist, a story that weaves and never quite goes where you expect it, and a world that’s broken and hard, leaving the characters to do what they can to soften the edges.

Vu Côn is a cool and thoughtful foil to Yên’s more impetuous nature, although it’s a pleasure to see Yên grow from the shuttered and wary soul, despite the occasional frustration that Vu Côn – and the reader – get from her growth! It’s also satisfying to see more of Vu Côn’s history throughout the story, and their reasons for their actions – and in addition, seeing the growth of the two children. The relationship between Yên and Vu Côn is thoughtful and slow, and I like seeing them tread around each other – and around the rest of the world and events.

It would have been satisfying to see more of Yên’s explorations of her writing, her magic, her passion for words and teaching; they took second place to the pace of the plot towards the end, which worked very well in story terms, but left me a little sad for that side of Yên’s personality (she got bribed with a library and then immediately left it! *cries*) But the story itself is very satisfying; the tangles and growths of all of the characters are complex and interesting, and the ending is sweet.

Definitely a book worth reading if you like sweet and thoughtful sff stories.