Gideon the Ninth by Tamsyn Muir 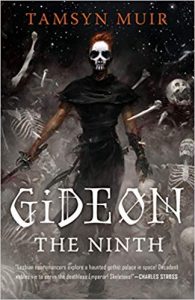 The Emperor needs necromancers. The Ninth Necromancer needs a swordswoman. Gideon has a sword, some dirty magazines, and no more time for undead bull****. Tamsyn Muir’s Gideon the Ninth unveils a solar system of swordplay, cut-throat politics, and lesbian necromancers. Her characters leap off the page, as skillfully animated as arcane revenants. The result is a heart-pounding epic science fantasy.

Brought up by unfriendly, ossifying nuns, ancient retainers, and countless skeletons, Gideon is ready to abandon a life of servitude and an afterlife as a reanimated corpse. She packs up her sword, her shoes, and her dirty magazines, and prepares to launch her daring escape. But her childhood nemesis won t set her free without a service. The emperor has called his necromancers to action, and Harrowhark is set on Gideon attending her as bodyguard. If Gideon survives, she ll be a hero, and a free woman. If not, she can look forward to eternity as a shambling bone-servant.

Look, do we even need to get into this? Lesbian necromancers in space. With sunglasses and a ridiculously kick-ass tone, and a murder mystery and lots of intrigue and weird characters and locked rooms and All Of The Relationship Issues. But also: GAY NECROMANCERS IN SPACE. Come on!

The plot is actually more slow and subtle than I expected (I mean, kick-ass necromancers in space) – it’s actually more murder mystery and locked-room, and much more about the characters and friendships – which, as I love character books, meant I really enjoyed it! The reveal at the end is enough that you’ll want to go back and re-read – as a friend put it, “[X] is having so much fun!” and it’s fun to re-read Gideon’s perspective too, once you know more about the twists and turns.

Gideon is awesome, Harrow is alternately really annoying and awesome, the rest of the characters are fun, I reckon I’m Fifth House and no one wants to be Second or Eighth (they’re creepy) and there is also a quiz you can take to find out. I haven’t yet done it. I’m still hung up on the possibility of finding out I’m Second and that would be terrible.

I’ve already pre-ordered the next one, and I can’t wait!