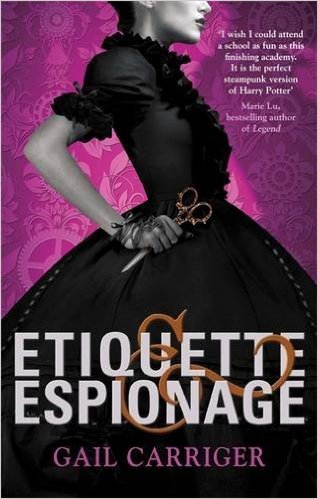 Sophronia is a great trial to her poor mother. Sophronia is more interested in dismantling clocks and climbing trees than proper manners-and the family can only hope that company never sees her atrocious curtsy. Mrs. Temminnick is desperate for her daughter to become a proper lady. So she enrolls Sophronia in Mademoiselle Geraldine’s Finishing Academy for Young Ladies of Quality.

But Sophronia soon realizes the school is not quite what her mother might have hoped. At Mademoiselle Geraldine’s young ladies learn to finish . . . everything. Certainly, they learn the fine arts of dance, dress, and etiquette, but they also learn to deal out death, diversion, and espionage – in the politest possible ways, of course. Sophronia and her friends are in for a rousing first year’s education. I love that this series immediately starts you off into an alternate universe; there’s mechanical butlers, airships, weird politics…and, of course, the problematic issue of what to do with younger daughters who simply do not know how to behave in polite society, and will insist on falling out of dumbwaiters with a torn skirt and rubber on their boots while trying to eavesdrop on their mother’s visitors. It is simply Not Done, and a Finishing School is exactly what’s needed.

Except this finishing school, as well as teaching how to hold a fan and how to serve tea, also teaches how to poison said tea, the art of passing a hidden message with only a bag of sweets and a pair of embroidery scissors, and the subtle art of lying convincingly while dancing a waltz – in addition to having a vampire and werewolf on staff, and being located in an airship. And that’s without the politics, plots, classroom gossip and general havoc of the actual year. This series is definitely a lot of fun! They’re very easy reads and light-hearted, even though there is quite a bit of politics woven in (particular in the second one) and a lot of action going on. Sophronia’s character is excellently done, particularly with the changes she undergoes as she learns (both in official and unofficial ways…) and her friends and classmates are also brilliantly portrayed. The school and wider world is brilliant; everything’s bound seamlessly together, not over-explained and not too complicated. I love that Victorian society has been adapted to werewolves, airships and espionage – there’s still a horror of showing ankles, even when kicking a kidnapper, and when climbing the side of an airship one must still ensure proper dress, with full petticoats! The adaption of the rules and etiquette is probably one of the most entertaining things about the series, in addition to the actual chaos and amusement of the plot. I think my only two issues so far are minor; Sophronia is a bit too good at everything, and even minor set-backs aren’t for long, which can get frustrating (while still being entertaining) – she’s just too good! And the politics, particularly in the second book, can get confusing with the multitude of characters – but that’s mostly me not concentrating hard enough on who everyone is.