Empire of Sand (The Books of Ambha, #1) by Tasha Suri 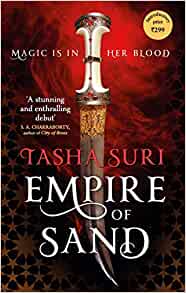 Mehr is a girl trapped between two cultures. Her father comes from the ruling classes of the empire, but her mother’s people were outcasts, Amrithi nomads who worshipped the spirits of the sands.

Caught one night performing these forbidden rites, Mehr is brought to the attention of the Emperor’s most feared mystics, who try to force her into their service by way of an arranged marriage. If she fails in their bidding, the gods themselves may awaken and seek vengeance…

You know a book is good when you have to tweet the author (who is a friend, I don’t usually tweet at random authors) going WHAT EVEN IS THIS and I HAD OTHER STUFF TO DO TODAY and YOU ARE A MONSTER.

It’s so, so readable, and I’m annoyed that it took me this long to get to on my TBR.

The setting is haunting and beautiful and I love the multiple cultural inspirations that wind together but never feel like something wholesale borrowed; the characters are believable (and this from me, who ranted about a book with no character agency and I  also really hate the cliches that usually come with this sort of plot because just URGH but this time, YES); the plot has a whole bunch of twists that are built up nicely and tug you along; the magic system is lovely and I love the learning process and just- 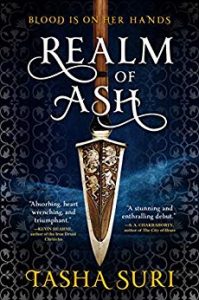 It’s a running-away-from-home and finding-yourself and realising-the-world-is-mean (actually, more like “realising the world is mean in a whole variety of ways”) and slow-falling-in-love and people-are-actually-kinda-decent and some beautiful magic and landscapes and settings and YES JUST GO READ IT OK.

Also I immediately bought the second one (Realm of Ash) and devoured it so there’s that.

I know I normally do slightly better reviews but it’s readable and lovely and annoying and it’s the type of book that’s exactly what you need for a rainy day when you have a sofa and a cup of tea. So just buy it, ok?