Do You Dream of Terra-Two? by Temi Oh 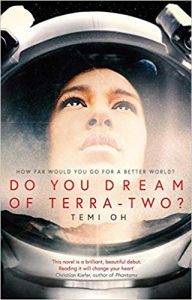 A century ago, scientists theorised that a habitable planet existed in a nearby solar system. Today, ten astronauts will leave a dying Earth to find it. Four are decorated veterans of the 20th century’s space-race. And six are teenagers, graduates of the exclusive Dalton Academy, who’ve been in training for this mission for most of their lives.

I don’t usually do bad reviews, but oh my goodness this book annoyed me.

Let’s start with the good. The characters are well-done, full of teenage angst. The relationships amongst them are nicely woven; the personalities and problems, the events and small dramas, the reactions to problems and the small joys. It is a very angst-filled book, but it’s also one about growing and learning and finding your place – and being scared of the unknown, scared of the future, and learning to overcome all of that.

The writing is also good; it’s thoughtful, philosophical in places, and nicely builds on each character’s personality to let them express wider thoughts. It can be a little clumsy in places but that actually works quite well for teenagers discovering something for the first time, and working towards vocalising their place in the world.

However, I’ve got serious bones to pick with the wider world and situation. The basic premise is that four adults and six teenagers are sent on a one-way trip to a habitable planet – but for some reason, they’re only sending these ten. More people will come later… because obviously that’s somehow cost-effective? Or it’s specifically useful to only send ten people to start with? (We get hints of the wider politics going on around the mission, but we don’t actually get to find out much about it, which is rather frustrating.)

But my main picky point is: who sends six teenagers into space with only four adults? Who sends teenagers into space and doesn’t realise they might get little things like depression and anxiety, particularly after the trauma they suffer at the start of the book? And who the f*** thinks an incredibly punishing regime of work, study, more work, more study, and no time outside of that – what is essentially a pressure boiler – isn’t going to result in some kind of steam explosion? There’s a complete lack of mental health understanding, no realisation that these kids all have their own personalities and ways of working, and no understanding of personality types that might work well together – or work well on a twenty-three year trip.

I also sincerely disagree with the competitive idea that the teenage crew seems to have. If you’re sending six teenagers into space, why the heck would you not be training them to work together? Would you not let them form friendships and memories and relationships that aren’t competitive? The friendships they do have seem to be in spite of the training, not because of it!

Incidentally, also, would you not train them all on multiple specialisms? And possibly make sure the ship had backup units of all the major components? If they’re travelling for twenty-three years, things are going to wear out. Things are going to fail. You might need, y’know, a spare life support system, just in case the one you have gets hit by something. Or multiple escape modules scattered around the ship. Or more than one person with knowledge of how to use an incredibly vital drive component that needs to be used otherwise the mission will fail. Just small backup things, nothing major.

My final straw came at the ending: it’s a complete deus ex machina. I won’t spoil it, but just say that it’s incredibly frustrating to have something dangled and then NEVER FIND OUT ANYTHING MORE ABOUT IT. The rest of the book could have been two-thirds shorter and then the rest of it spent on the time after the current climax – there’s a political and social mystery that just gets completely dropped, and also some huge character decisions that are just handed to us, and then the book ends. It felt like a huge let-down to spend so much time on the characters, and almost forget that the wider world is out there – and then when we see a glimpse of it and get a hint of a wider mystery, snatch that away immediately, and present an ending.

That said, I’ll be keeping an eye on Temi Oh – but I’ll wait for the next novel to be convinced.