Dangerous To Know: The Chronicles of Breed: Book One by KT Davies 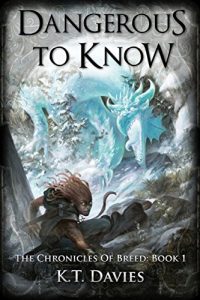 After Breed, a thief-assassin of small renown is chased by a dragon, tricked by a demon, almost killed by a psychopathic gang boss, and hunted by a ferocious spider, life really takes a turn for the worse.

Sentenced to five years bonded servitude to a one-handed priest magician, Breed must find the hammer of the ancient hero known only as The Hammer of the North within a year and a day…

So, with only a drug-addicted vagrant, a rat-faced child, and a timid priest for backup, Breed sets out for the mighty city of Valen and the tomb of the Hammer.

What could possibly go Wrong?

As it turns out…just about everything can go wrong. As, honestly, you’d expect from someone tricked into a deal with a demon and then enslaved by a priest…

But Breed’s not exactly sympathetic. A thief, murderer, general doesn’t-care attitude…plus being a mixed-race monster that just about everyone else distrusts is not exactly a recipe for being liked. That said, Breed’s very endearing as a character; when catastrophe after annoyance after disaster keeps happening, they’re still trying to come out – not necessarily on top, but at least the right way up. They’ve also got a refreshingly direct moral compass, a not-so-subtle way of dealing with things, and a foul mouth. It’s a winning combination.

The plot’s entertaining, if fairly full of politics and backstabbing; this is also the first of a trilogy, so while several of Breed’s problems get sorted, various more are still lying in wait for future books. However, it’s a story that rattles along with various amounts of snark, questionable characters, choices of dubious value, and some good old punch-ups. I’ll be interested to see where Breed goes next!