Children of Time by Adrian Tchaikovksy 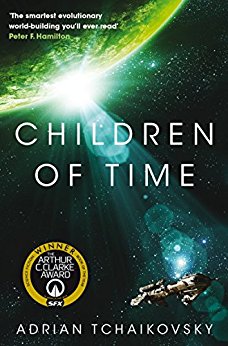 The last remnants of the human race left a dying Earth, desperate to find a new home among the stars. Following in the footsteps of their ancestors, they discover the greatest treasure of the past age – a world terraformed and prepared for human life.

But all is not right in this new Eden. In the long years since the planet was abandoned, the work of its architects has borne disastrous fruit. The planet is not waiting for them, pristine and unoccupied. New masters have turned it from a refuge into mankind’s worst nightmare.

Now two civilizations are on a collision course, both testing the boundaries of what they will do to survive. As the fate of humanity hangs in the balance, who are the true heirs of this new Earth?

Definitely sci-fi, but good sci-fi. And this is coming from someone who definitely dislikes the This-Is-How-It-Works-In-Ten-Pages-Of-Detail that seems to plague so many of the classics. I did find it slightly heavy going (and tended to read in chapter-sized chunks) but the payoff is absolutely worth it.

It’s a story of genetics and modification and evolution, but it’s also characters. It’s humanity’s last rag-bag of peoples who have clawed their way up through the ruins of our civilisation, and done the best they can with the remnants of technology to leave a dying Earth. But when the ship Gilgamesh, carrying its cargo of humanity, reaches their best hope, they find it’s occupied – and the sentinel does not want them to land.

And down on the terraformed planet, the experiment to produce a new space-faring race is progressing – species rise and clash, adapting and moulding to their environment, facing challenges that are both similar and unexpected to humanity’s journey. But over two thousand years, what rises to meets its test isn’t what the sentinel expected.

The two strands wind nicely; the evolution of life on the planet jumps forward, generation by generation, but I loved that the names stay the same to keep a sense of continuity. And up on the Gilgamesh, it’s the same names, coming in and out of deep-sleep over the course of time. The character’s stories are as fascinating and enthralling as the technology is, and I absolutely love the part-alien, part-familiar mindset of the planetside civilisation.

And that mindset, for me, is what makes this book absolutely worthwhile – the final twist is brilliant. It’s a story of challenge and technology and people and civilisations, and it’s definitely worth reading.