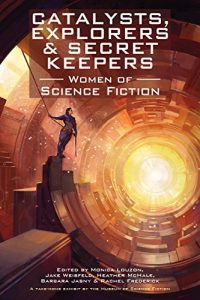 “Catalysts, Explorers & Secret Keepers: Women of Science Fiction” is a take-home museum exhibit celebrating women who, as both writers and characters, set new horizons for the science fiction genre. This anthology features stories about protagonists with agency who save lives, explore strange new worlds, prove their mettle, and voyage toward self-discovery. Curated by Museum of Science Fiction staff under the direction of lead editor Monica Louzon, this take-home exhibit is meant to be savored and shared.

Just….ARGH. Read it. I don’t know if I can pick any one particular story – the one that stood out was the one I didn’t get on with, because all the rest were beautiful and amazing. Read it.

The first story isn’t, really; it’s a poem by Jane Yolen called “The Physics of a Dying Star”, strange and twisting, about stardust and barns. It’s a beautiful start, and the next story – “Ice In D Minor” by Anthea Sharp – is probably my favourite story of the anthology, because it’s such a beautiful melding of two weird concepts (a polar icecap and an orchestra, of course…) – it’s simple and haunting.

“What We Knew Then, Before the Sky Fell Down” by Seanan McGuire has a classic fantasy feel; a Quest, a Thief…and the thing he’s come for is all too practical in this new, shattered world. “Battle Royale” by Kiini Ibura Salaam is the one I didn’t entirely get on with; it’s a fluid story, twisting through scenes and times, taking us through struggles and back again…but it just didn’t fit with me, and that’s fine. “A Ceremony of Discontent” by Eleanor Arnason, on the other hand, I love – how do you rid yourself of anger and discontent? I love the society and village, the interactions and the personalities, which make the simple story complex. Personalities and society is also at the forefront of Pat Murphy’s “Fix-It Shop”, and I adored the turn-around twist to the society in this; it’s a thoughtful mirror on our own.

Jane Yolen’s second poem, “Juno in July”, is a thoughtful and pointed comment on NASA’s aim for the Jupiter mission, and Monica Byrne’s “Free Fall” keeps up the sci-fi theme with a winding story between two times, a relationship and a fall through the grid, falling to the other side of the world. “A Peculiar People” by Betsy Curtis adapts the sci-fi theme into an almost Victorian feel with a sweet story about relations between Mars and Earth, new technology and old lives, and how love can make a difference.

Nancy Kress’ “My Mother, Dancing” is a sweet and thoughtful story about aliens, visitors, seeding life, and the choices made…and “A New Panama” by Karen Lord is a story about colonies, and the search for new homes – and how that might look when humanity decides to spread out into the stars.

N. K. Jemisin’s “The Trojan Girl” takes us into the world of the Amorph, the shadow-world to ours, and the wolves that hunt there – unreal and real and somehow incomplete. “The Greatest Discovery of Dr. Madeline Lightfoot” by Bonnie Jo Stufflebeam drops us into the world of the biologists and explorers, discoverers of a new species – and how they effect the world, society, and Dr Lightfoot herself. Jane Yolen’s final poem, “Not So Great A Divide” suggests a bridge between science and storytelling; and then Carrie Vaughn takes us into a more classic fantasy tale in “For Fear of Dragons”, and what happens to the girls sacrificed to the dragon. It’s one of my favourites in the anthology, although it felt a little out of place amongst the more sci-fi themed stories.

Naomi Kritzer’s “Cleanout” is a modern story with a clever undertone; three daughters clearing out their parents’ house, analysing their relationships and choices against a background of questions about their parents.  “Walk in Silence” by Catherine Asaro continues the family theme, and this was one I’d love to see expanded, even though it is one of the longest in the book – a story of love across cultures.

“Being Kitty” by AJ Lee takes us back to our world, with a sweet story wrapped around the advent of AI and voices at the other end of the phone.  “Midnight on the the Space Station Alcatraz” by Floris M. Kleijne was another favourite; a war criminal sentenced to death, with a clever twist that I loved! Sarah Zettel’s “Fool’s Errand” stays in the sci-fi space-faring genre, with a fool chasing down a rogue AI; and the final story, Sarah Pinsker’s “Remember This For Me” is a beautiful one and another favourite – a story of old age, memory loss, genius and inspiration and art.

The entire anthology is filled with beautiful, thoughtful, inspiring stories – and is well worth reading.