The Carpet Makers by Andreas Eschbach. 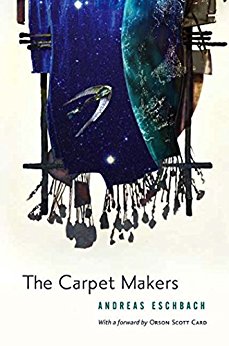 Since the time of pre-history, carpetmakers tie intricate knots to form carpets for the court of the Emperor. These carpets are made from the hairs of wives and daughters; they are so detailed and fragile that each carpetmaker finishes only one single carpet in his entire lifetime.

This art descends from father to son, since the beginning of time itself.

But one day the empire of the God Emperor vanishes, and strangers begin to arrive from the stars to follow the trace of the hair carpets. What these strangers discover is beyond all belief, more than anything they could have ever imagined…

It’s pieces of a story, all smushed together. There is a thread running through it: carpets made of hair, woven over a lifetime by the carpet makers from the heads of their wives and children. Delivered to the traders and then taken to a spaceport, and then taken to the Emperor: eternal, everlasting, and ruler of the universe.

Except that the rebels who have taken over, killed the Emperor and destroyed the Empire, have no idea about them. So where are they going? Why are so many worlds dedicated to producing these beautiful, eerie carpets, and what are they for?

I found the book frustrating, in many ways. It’s a collection of short stories; the view jumps from the carpet maker and his wayward son to an explorer, back to a trader, to a tax collector, to a rebel…we see a lot of different aspects of life in the Empire and on the worlds, and the main characters from one story rise again in other stories, woven in the background and scenery. It’s very clever and very different, but it also meant that I was putting the book down a lot between the chapters, unsure of how anything fitted (which is the point) but also unsure if I wanted to keep reading.

The language and telling of the story is beautiful in places, but it’s the strangeness of the world that takes centre stage, and the lives of the characters for the brief moments that we stay with them. It’s definitely a sci-fi story, but I liked the way it doesn’t focus on the technology; it’s just an odd, broken machine, and we swoop from part to part until at the end, we understand the whole.

I can’t say I necessarily recommend it; it’s an interesting but odd book, and honestly there’s other things I’d rather read. But it’s worth reading, just to experience something that isn’t your run-of-the-mill storytelling. And if you start it and like the first few stories, push on: it’s worth finishing it.