The Bull-Riding Witch by Jamie Marchant 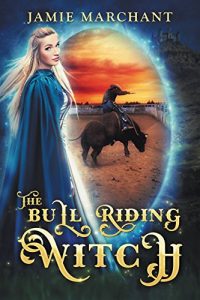 Waking up in a man’s body would ruin any princess’s morning.

Daulphina’s father, the king of Asteria, has always wanted a male heir. Unfortunately for him, Daulphina’s magic means that will never happen unless her bastard half-brother displaces her on the throne. But she’ll take on all the gods herself before she lets that happen. He isn’t nice enough to be a good king.

But apparently, the gods don’t like being challenged because she’s flung across the void and into the dumpy old trailer and chiselled body of Joshua Killenyen, a rodeo bull rider from Alabama. With nothing to eat but Frosted Flakes and no knowledge how she got there, she better find a way home before she gets her head stomped in by the bulls she must ride. Or her brother will take the throne and reduce her people to slavery. Remember, he isn’t nice.

So, advanced warning for readers: this is the first half of the story, so it does end on a cliffhanger. The author’s currently writing the sequel though!

The Bull-Riding Witch is a cute story; it’s a mix of adventure, self-discovery, a dash of romance, and a lot of general chaos! The plot is a bit of a different twist as the fantasy princess is thrown into a bull-rider’s body, and includes some nice tangles of personalities and politics,  with some sly, amusing digs at gender roles in fantasy and a hefty dose of American small-town with added magical confusion and, obviously, bull-riding!

My main issue with the story was the pacing, as I felt that the story took a while to get started. While Daulphina does get thrown across into Joshua’s body quite quickly, the plot line focuses more on her struggle to get acclimatised to the strange world than finding out what’s going on – and while I did enjoy the confusion and general chaos caused by things like cars, it meant that I wasn’t getting many answers to what had happened or why, and I found that I was losing interest within a few chapters. While I liked the way that we see both worlds (and Joshua’s absolute confusion at Court etiquette), I also couldn’t really identify with either a lost princess or a bull-riding cowboy, and I didn’t really feel any particular sense of place for either location – it was hard to imagine the scenery a lot of the time, and so the characters end up being the centre of focus. However, Daulphina was an interesting personality and brought some nice life to the scenes, and the wide mix of supporting characters bouncing off Daulphina and Joshua worked well.

I tried skipping ahead to see if I could regain interest (which does work for me, and I may possibly have read The Hobbit middle-back-front… :-/) but unfortunately I just couldn’t get back into it, and ended up skimming to the finale. I think my take-away from this is to put my hands up and say, “Not my type of story” – I’m not really into bull-riding or Americana, and when the plot didn’t pull me in, even the dash of fantasy and mystery unfortunately couldn’t bring the story to life for me.