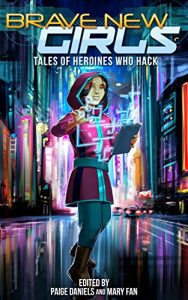 Welcome to the sci-fi worlds of brainy teen heroines who hack not just computers, but whatever puzzles come their way. A scrappy mechanic on an oppressed planet builds a device she hopes will be her ticket to a better future. A fledgling chemist uses her skills to catch a murderer. A teen inventor creates a weapon to battle the mysterious beasts attacking her city. A superhero-in-training puts her skills to the test when attackers strike her compound. A self-styled detective hacks an augmented reality game to solve a dastardly crime. Girls who code, explore, fix robots, pilot starships, invent gadgets, build high-tech treehouses, and more. With tales ranging from space adventures to steampunk to cyberpunk and more this 23-story collection will delight, thrill, and enthrall.

So this is the third in a series of anthologies by the same editors (Girls Who Science & Scheme, and Tales of Girls & Gadgets) all filled with stories about girls in tech with a large dose of sci-fi, fantasy and just plain awesome! I ended up scribbling notes as I read, so have those…

Attack on Aegis by Paige Daniels – accidental teenager-turns-superhero mixed with hacking, a cute boy, college plans and saving the day!

Sea-stars and Sand Dollars by Lyssa Chiavari – when a teenage engineer builds a mini submersible for fun, she doesn’t expect to meet a cute girl, or have to save the day…

Data Recovery by Nicholas Jennings – an unusual view on a computer tech recovering data from a broken computer, and a sweet ending.

The Alchemist’s Daughter by Selenia Paz – Ada Lovelace, the elixir of life and a dose of intrigue? An interesting premise!

Life Hack by Aaron Rosenberg – DNA might be boring if you’re being lectured on it, but how about if you could augment it whenever you wanted…

Second Sun by JR Rustrian – an armoured heroine wakes up in an unknown room with a talking voice…I liked the mix of strangeness and the eventual twist!

In The Shadow of Zyrcon by Joanna Schnurman – evil corporations, and scavengers rescued by tech! A sweet couple 🙂

Twisted Brick by MJ Moores – intrigue, adventure and a daring rescue! I liked the two voices to this.

Impossible Odds by AA Jankiewicz – a princess undertaking her final training flight has to fly, along with her crew, on a test mission that no one will tell them about…

In Cyberia, Avatar Controls You by Jeremy Rodden – love the concept of a hero from the outside, getting into the online world…

The Power of Five by Jenifer Purcell Rosenberg – happy and simple story about a group who get trapped in a cave and – in amongst random scientific facts – discover an alien!

Discord on Harmonia by MLD Curelas – a habitat dome comes under attack – but not just from the expected sources!

The Experiment Called Life by Halli Gomez – trying to change her tourette’s with a brain-wave monitor – and an interesting story on fitting in and being an outsider.

Inmate C87 by Kay Dominguez – probably my favourite for the concept; a prison guard tries to work out why some of her charges are telling different stories, and why one insists that he isn’t who his records say he is…

Pyramid Scheme by Jamie Krakover – fun and quick story of a robbery of a pyramid – or an anti-robbery that goes wrong! amusing duo.

Becoming A World Builder by Valerie Hunter – steampunk feel; after-effects of a war, a teenager struggling with the idea of leaving for boarding school and finding out where her talents lie, and the danger that comes when people want your inventions for a war…

ShockWired by Tash McAdam – cute story, second favourite? steampunk and rescues, with a sweet duo at the centre of it

The Altered Avatar by Mary Fan – murder mystery that takes place part in VR, part in reality, and with an AI as the detective!

The pictures are great, too; there’s a wide variety of artists who’ve all contributed an image that fits to the individual stories. So overall – a fun, easy-going anthology that’s definitely got girls and tech front and centre!