Artificial Condition by Martha Wells – book 2 of The Murderbot Diaries 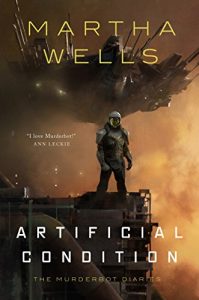 It has a dark past—one in which a number of humans were killed. A past that caused it to christen itself “Murderbot”. But it has only vague memories of the massacre that spawned that title, and it wants to know more.

Teaming up with a Research Transport vessel named ART (you don’t want to know what the “A” stands for), Murderbot heads to the mining facility where it went rogue.

What it discovers will forever change the way it thinks…

My review of All Systems Red (Book 1) is here; this has possible spoilers if you haven’t read the first, although nothing major.

Artificial Condition continues the story on from where All Systems Red left off – it doesn’t really spoil the first one to say that the Murderbot leaves to continue its search for its past, as the fun in the first book is the ongoing chaos that gets it to the end! So while it’s the same universe and there’s an ongoing storyline worked in, Murderbot is now heading to find out more about its own past – and, on the way, taking on another job that involves dealing with humans. And those humans tend to pry into things that Murderbot would rather they didn’t, and get themselves into trouble that Murderbot then has to fix.

I liked that the extra mystery plot is wound around the original discovery thread; Murderbot does want to find out about its past, but also gets involved in other things – and meets more people. Murderbot definitely becomes more human (not that they’re very happy about that development) and makes some friends. I absolutely adore ART, the transport ship that Murderbot ships out on: it’s sarcastic in a “I’m smarter than everyone else and I already worked out the answer” way, and I love the developing relationship between the two of them. Also, I love that ART needs someone to watch TV with! Some of the moments are just adorable.

The book feels too short, but in an “I want more!” rather than an “unfinished story” way ; there’s plenty of mysteries left for the next two books, and I’m really looking forward to them. I’d also love a longer piece with Murderbot involved, but then hopefully the four-novella series will fit that desire perfectly!

So – a good continuation of the first Murderbot book, and enough mysteries left to tug me onwards into the rest of the series; plus, extra sarcasm from ART as well as Murderbot! What’s not to love?