I’ve already reviewed The Tea Master And The Detective, which I really enjoyed, and it definitely put these two novellas on my reading list! All three are set in the same universe and while they’re not linked, some characters do weave in and out.

Also, incidentally, a really interesting thread from Aliette on the background!

Mildly grumpy set of tweets, but: yes, I have a galactic space empire inspired by Vietnamese culture. It’s not a transposed version of, say, Vietnam in the 15th Century Lê dynasty: there have been *major* social and cultural evolutions.

I also want a novel in this universe pls. Or a series of novels. Moar writing anyway!

On A Red Station, Drifting 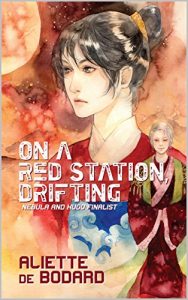 For generations Prosper Station has thrived under the guidance of its Honoured Ancestress: born of a human womb, the station’s artificial intelligence has offered guidance and protection to its human relatives.

But war has come to the Dai Viet Empire. Prosper’s brightest minds have been called away to defend the Emperor; and a flood of disorientated refugees strain the station’s resources. As deprivations cause the station’s ordinary life to unravel, uncovering old grudges and tearing apart the decimated family, Station Mistress Quyen and the Honoured Ancestress struggle to keep their relatives united and safe. What Quyen does not know is that the Honoured Ancestress herself is faltering, her mind eaten away by a disease that seems to have no cure; and that the future of the station itself might hang in the balance…

I absolutely adore the worldbuilding for these books. I love the idea that your ancestors stay with you, ghosts who can advise; also the mind ships and space stations, minds housed within perfectly formed structures built for them to control – except that sometimes, they fail…

And this novella is about one that is failing, in the midst of the confusions of a war and refugees arriving and political chaos; and because the station looks after her descendants, she’s a member of the family. She’s a mind that’s always been there – particularly for Station Mistress Quyen, who dreads the silence and loneliness. But Quyen has other tensions; her family is fracturing, and when a former magistrate arrives claiming sanctuary, the problem of what to do with someone from a different social league and with different views adds to the tensions.

I adore the writing and the characters in Red Station; the sly jabs and bare-faced insults in poetry form, or said by what is not said, or saying the wrong or right thing – almost a battle of blades and swords except done at every social interaction. The different views on the war, the running of a space station, all bleed into every phrase – and then the way everything comes together at the ending is lovely, and heart-breaking.

This isn’t a heavy read, despite the tensions and the background; it’s about the characters and their interactions, their choices, and de Bodard writes with a light touch despite the darker themes.

The Citadel of Weeping Pearls 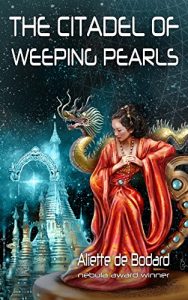 Thirty years ago, threatened by an invading fleet from the Dai Viet Empire, the Citadel disappeared and was never seen again.

But now the Dai Viet Empire itself is under siege, on the verge of a war against an enemy that turns their own mindships against them; and the Empress, who once gave the order to raze the Citadel, is in desperate needs of its weapons. Meanwhile, on a small isolated space station, an engineer obsessed with the past works on a machine that will send her thirty years back, to the height of the Citadel’s power.

But the Citadel’s disappearance still extends chains of grief and regrets all the way into the fraught atmosphere of the Imperial Court; and this casual summoning of the past might have world-shattering consequences…

This is a quieter story than Red Station – or more personal. War has come to the Empire, and the Citadel of Weeping Pearls may provide a weapon that enables the Empire to fight back…but the Citadel vanished many years ago. And finding it may prove more problematic than expected…

I love the way the personal relationships dominate this story; both of the main threads want to find the Citadel for their own personal reasons, even though it’s a scientific challenge and a military necessity respectively; one protagonist has lost her mother, the other her daughter. And it’s these tugs that pull the story onwards; never dramatic and always told with a light hand, but with some thoughtful threads and wonderful worldbuilding wound in. I liked the ending of this, too – no spoilers, but just to say that I liked that everything wasn’t neatly tied into a solution.

Together, all three novellas make a lovely collection that expands the universe every time you read them – and I sincerely hope there will be more in the same universe to come!