The Aeronaut’s Windlass: Book 1 of the Cinder Spires by Jim Butcher 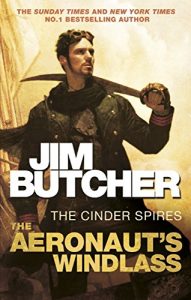 Since time immemorial humanity has lived inside the Spires, habitats towering for miles over the dangerous, monster-inhabited surface of the world.

Captain Grimm of the merchant airship, Predator, was dismissed from Spire Albion’s military in disgrace – now his ship and crew are all he has, and he’s fiercely loyal to both. When the Predator is severely damaged in combat Grimm has only one choice – take on a clandestine mission for Albion’s leaders, or stay grounded for good.

And even as Grimm undertakes this perilous task, he will learn that the conflict between the Spires is merely a premonition of things to come. Humanity’s ancient enemy, silent for more than ten thousand years, has begun to stir once more. And death will follow in its wake . . .

This has been on my TBR pile for aaaaaages, and I keep meaning to read it! One of the issues was that I’d got it in hardback, which is great, but not helpful for carrying around. However!

Definitely, definitely worth the wait.

In short, it’s an excellent read.

I loved the worldbuilding; the Napoleonic-era terminology lends itself incredibly well to flying ships, and it’s really nice how the familiar mixes with the strange to make the world work. The spires are home to humans but also monsters, and….cats? Rowl is a wonderful character; as aloof and self-centred as everyone knows cats are, but also fiercely loyal and looking out for his humans.

The rest of the cast is as good. I loved the villains; they’re a brilliant mix of “just doing my job” and evil/insane/weird motives. Madame Cavendish is particularly freaky! And the heroes; Gwen was my favourite, with her penchant for sticking her foot in things, but I loved Folly’s oddness and Bridget’s outsider perspective, and I liked seeing how the relationships developed. I loved Grimm too – his relationship to his crew and boat and superiors, and the dollop of past history that hasn’t been explained yet – but explained just enough to keep everyone guessing!

It is the first in a series and so while the arc of this book gets resolved, it’s left open for more – and I’m definitely on the lookout for them. It’s a brilliant, fun, action-packed, character-filled first book that combines war, steampunk, action, romance and…problems with doorknobs? Well, even the best wizards struggle with technology…

2 thoughts on “Review: The Aeronaut’s Windlass”