The Suspicions of Mr Whicher by Kate Summerscale 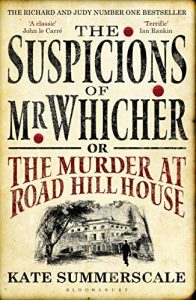 Saville’s corpse, already stiff, was laid on a table beneath the kitchen window; upstairs the shape of his sleeping self was still indented on the sheets and pillow of the cot.

On a summer’s morning in 1860, the Kent family awakes in their elegant Wiltshire home to a terrible discovery; their youngest son has been brutally murdered. When celebrated detective Jack Whicher is summoned from Scotland Yard he faces the unenviable task of identifying the killer – when the grieving family are the suspects.

The original Victorian whodunnit, the murder and its investigation provoked national hysteria at the thought of what might be festering behind the locked doors of respectable homes – scheming servants, rebellious children, insanity, jealousy, loneliness and loathing.

So I think the attraction in this is the detail; it’s the little things about Victorian life and the life behind closed doors that attracted the Victorian press and now the modern read.

But, I admit, it’s not for me. I read the first quarter or so, and got bored…I skimmed, skipped to the end, and was happy enough having read the conclusion. Otter has been reading this too and we got to discuss some of the details, so that’s been interesting – but overall, I just found it too slow and almost devoid of personality, for all that it’s touted as being full of drama. Mr Whicher’s process and conclusions were interesting, and it being one of the first detective cases…but overall, just not my thing. 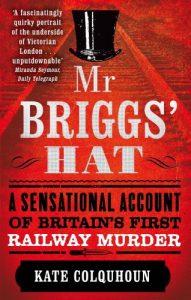 In July 1864, Thomas Briggs was travelling home after visiting his niece and her husband for dinner. He entered a First Class carriage on the 9.45pm Hackney service of the North London railway. At Hackney, two bank clerks entered the carriage and discovered blood in the seat cushions; also on the floor, windows and sides of the carriage. A bloodstained hat was found on the seat along with a broken link from a watch chain.

The race to identify the killer and catch him as he flees on a boat to America was eagerly followed by citizens both sides of the Atlantic. Kate Colquhoun tells a gripping tale of a crime that shocked the nation.

Unfortunately, this was pretty much the same feeling as Mr Whicher. I got further with this one – nearly halfway! – but again, the multitude of details and the writing style just didn’t grab me. I found the repetition of details frustrating – I was being told something, and then given the original wording from a newspaper that said the same thing – and the frequent diversions into details about life at the time were both useful/interesting and frustrating! That said, it’s a very interesting book, and I definitely appreciate the interest in the case at the time; Otter complained that Mr Whicher had rather spoiled whodunnit, but I don’t think that’s really the point of the Mr Briggs case – it’s more the inconsistencies and questions over the entire case which meant that the man they hanged might not have been the right man! It’s much more a study in the detection process in its infancy, and all the problems inherent in that.

So – very good if you’re into that sort of thing, but not for me. 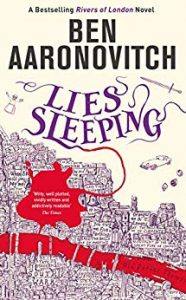 Martin Chorley, aka the Faceless Man, wanted for multiple counts of murder, fraud and crimes against humanity, has been unmasked and is on the run.

But even as the unwieldy might of the Metropolitan Police bears down on its foe, Peter uncovers clues that Chorley, far from being finished, is executing the final stages of a long term plan.

A plan that has its roots in London’s two thousand bloody years of history, and could literally bring the city to its knees.

To save his beloved city Peter’s going to need help from his former best friend and colleague – Lesley May – who brutally betrayed him and everything he thought she believed in. And, far worse, he might even have to come to terms with the malevolent supernatural killer and agent of chaos known as Mr Punch . . .

This is very much a continuation of the same Rivers of London vein; action-packed, decent characters, lots of mythology, and some nice nods to a whole bunch of London and police in-jokes. However, for me it was spoiled by two things; minor errors on the copy-edit side, and the fact that I read the last book at least a year ago and so can’t remember a) most of the plot, and b) who anyone is. Despite that, it was an ok read; I definitely could have done with re-reading some sort of summary, but that’s mostly on me not managing to pick this up- it was a good read anyway, albeit occasionally confusing. It is also the seventh in the series, but if you liked the rest – you’ll like this!