Just random musings…because this is my blog, damnit, and I can write what I want. 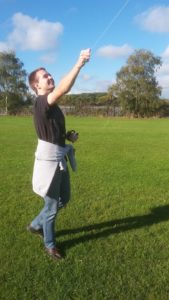 It sometimes feels as if he’s not gone, not really. He’s another one of the people that I’ve left behind, going on to live their own lives without me; someone I can look up on Facebook, or text, or bump into; someone who’s going to different places and doing new things; someone I said goodbye to (or, in one or two cases, some version of “fuck you”) and walked away from – but they’re still there, in life as well as in memory.

And then I remember he’s not. And usually swear.

Derpy’s still on my desk at work, and I still occasionally stumble across a photo of him on my computer and call him an idiot. I still wonder what he would have made of my life here, and the amazing people who fill it. But hey ho, what ifs.

There’s a line in Mary Renault’s The Persian Boy that has always resonated with me: Bagoas talking about Alexander – “I am older, now, than my lord in his glass coffin.” Just the idea that we only get so far, and then the rest of the world carries on – and overtakes us. Not that he was older than me, but…the idea that I’ve carried on, changed so much, and he won’t ever get a chance to do any of it now. I know, it’s not a new idea, but they’re always given more poignancy by a reality.

The reason I’m currently musing is that I got given a kite a while back by my aunt, who knew what he meant to me, and knew how much fun we’d had flying our rainbow-striped one, currently up on my wall in Salisbury and waiting to come here. It’s a tiny travel kite and I can’t wait to find somewhere to fly it – and so I’m going to spend some time with a kite trailing behind me and the ghost of my friend running alongside, laughing as we watch it dance.

I think he’s going to end up in some writing soon as well. There’s been more Dresden world in my head, and I want to play with more characters…so I hope he’ll be the inspiration for one of them.

So. Gone, but never forgotten. And I get to fly a kite sometime soon.