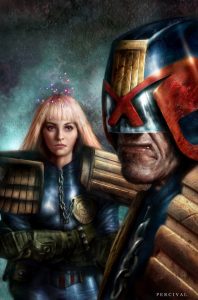 Judge Dredd may be The Law, but he’s also a pedantic, irritating dick…which I think is the point.

I’ve got a couple of Judge Dredd novellas on my reading list, and having read through those (which were ok, actually) I figured that I needed some more background. I get the city, sort of, but I know there are depths I’m missing. And working at Rebellion comes with a bonus of all the comics online, so I’m working my way through the stash!

Thankfully, though, not all of them. One of my colleagues has incredibly helpfully put a list online of the ‘useful’ episodes, and so I don’t have to read through however-many 80’s cliches…

Although I am definitely in the 80’s. Wars against robots, mutant dinosaurs and resurrected Presidents ahoy!

And Dredd is a dick. One of my colleagues commented that he’s good when he’s playing off against others – and he is. Mega City One is at its best for the life in it, I think…I do wonder how they didn’t run out of stories for Dredd, as he feels like he could be a very one-shot wonder character. There’s no moral flexibility, no romantic interest; he basically gets to beat up another set of thugs and prove how tough he is each time by Doing The Right Thing.

Not that I like Rico any better, mind, but I think he might have the right idea about life.

However, I love the Judge Anderson stuff! I’ve read a couple of novellas and her major comics, and I really like it. I’m waiting for her to turn up in the main Dredd comics but I suspect it’ll be a while yet, as I’m still in the 80’s and women are still mostly screaming victims. I have no idea how she keeps any sanity in the city (and that’s where I do have to actively suspend disbelief) but so far, I’ve got a lot of respect for the writers – despite what I suspect was a lot of fanboy pressure, she’s actually a bloody good, well-rounded character who can definitely kick ass when needed – and who also understands that it’s not always needed. Unlike a certain helmeted goon.

But I’m slowly approaching the modern era with Dredd, so I’ll see who he ends up fighting next!

One thought on “Judge Dredd – He Is The Law”