It’s not a book – although I do have a lot of book news to share as well! I am very pleased to announce that we have acquired a Bobble. 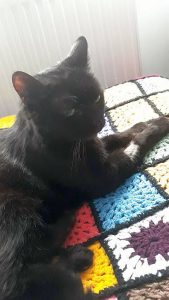 He is a rescue from Oxfordshire Animal Sanctuary; he’s sixteen, very opinionated, and has already claimed the end of the sofa as his sleeping spot! He’s also completely chilled – he shot out of the cat carrier, investigated everything, and then promptly went to sleep. Not a care in the world, this one…

He’s also super sweet, has an extremely expressive tail (I do wonder if he’s got some Siamese in him!), loves scritches, purrs as he drops off to sleep, and has grey toe-beans. He’s going to be an indoor cat (partly because it’s easier on us, and partly because he’s already got a John Wayne swagger in his back legs and isn’t too keen on the stairs) and, I suspect, is entirely happy with this state of affairs as long as he can watch the birds out of the window (which he’s already spent some time doing!)

He has also used the cat bed we bought specifically for him! It’s his “I am not to be bothered” bed, but I’m really happy that he’s using it. It’s quite impressive!

Yes, there will be more cat pictures. No, I’m not officially a cat lady yet – Peter and Jodie are still with my housemates (and loving it) so they’re technically not mine, that’s my story and I’m sticking to it… and yes, I do have a thing for black cats. How can you not love them?!

One thought on “I Have A New Acquisition”