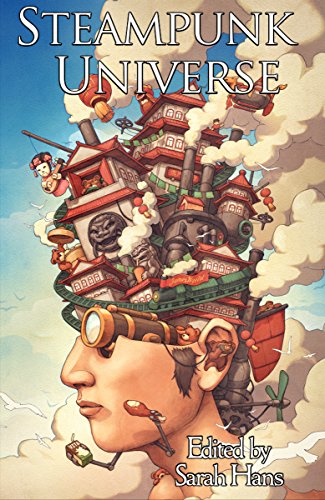 I have another GreenSky short story available, in the Steampunk Universe anthology! It’s currently available on Kindle and will shortly be available in hard copy too.

(Also, the cover is gorgeous!)

Have an extract of the beginning…

It was the Glider that had distracted her. Usually, Kita’s eyes would be fixed on the trail; on the lookout for rocks, loose patches of sand, scree, anything that might be obstructing the trail. Even with the clockwork engine powering the wagons, they couldn’t get over every obstacle and it was easy to run the wheels into loose sand or a too-large rock. She was careful. She had to be careful.

But the Glider was drifting overhead, up in the endless green sky. There were one or two around routinely now; they were part of the mapping teams out of Huish, and could often be seen floating one way or another across the desert. She’d been lucky enough to see one doing some stunts a few weeks back, diving and whirling. The caravan convoy had stopped just to watch, all the drivers gasping as it shot down towards the desert floor and somehow missed the rocks by a flicker, whirling and spinning back up into the sky. Kita wondered how the pilot could even think straight while doing that.

But this one was just floating, slowly moving. She could see the wide canvas of the wings with their wooden struts and taught ropes, the faint shadow of the pilot hanging under it. No need for an engine thanks to the Mages that flew them, so they made no sound…they were so beautiful.

And her wagon hit a pothole.

You can get it from Amazon on Kindle and shortly in hard copy.