1.Sitting in our neighbour’s garden with a fire globe & wine & fish and chips 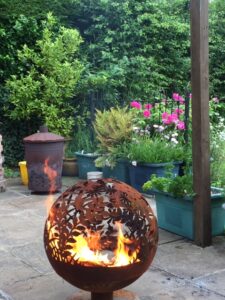 We were over near our definitely-not-local fish shop (there is a local one, which isn’t yet open… progress on that is a matter of fierce anticipation for everyone in the area!) and picked up some for our neighbour as well as ourselves – perfect social distancing food, as everyone can just eat out of their own boxes! We had old fence wood to get rid of, too, and so we got to use said neighbour’s fire globe… and the wine, well, you gotta have a glass of something. It was a nice, quiet evening, and was very much a balm to the soul – plus we got some cat company, which is always a pleasure. (The fish may have had something to do with that, I admit!)

2.The weight is lifting… 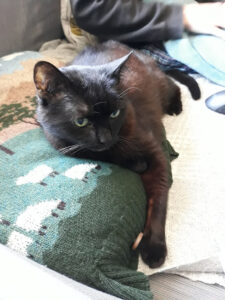 I’m not doing a whole bunch of stressful admin for an old house (it’s been handed over to a lovely agent, who will definitely be better than me at remembering when to get new certificates for everything, and trying to fix everything that’s gone wrong this month) and it just feels so much better. I’m a bit frustrated at myself that I didn’t ask for help earlier (to be fair, I didn’t realise that I could) but better late than never, I guess.

I also saw some ex-work friends for lunch (which was lovely – I really do miss the people!) and everything’s still generally on fire there, and IT IS NOT MY PROBLEM! It’s such a great feeling. I knew it was all heavy, but didn’t realise quite how much it had dragged me down until it wasn’t any more, and I’m in a job that doesn’t demand my heart&soul and spend every working hour reminding me that however much I do, it will never be enough. I’m still absolutely fucking angry about that whole thing, but I’m also aware that there’s nothing more I can do, and it’ll just drag me down again to be thinking about it – so I’m trying not to. But it is lovely to hear about the rolling chaos and know that I don’t have to give a single fuck any more.

I’ve been booking bits for December – we’re going to Chester – and London in October, and it’s been very satisfying to be able to think about travel again… even if it does get cancelled, which is fine, and we have contingency, but it’s a nice possibility! We’re also thinking about Canada and Antwerp for next year, but that one’s a bit more of a “let’s just see how the next few months go…”

We’re also starting to do more in the local area, too – Otter & I have been trying to find things that are nicely distanced, so we’re going kayaking next week sometime, and hopefully trundling out for some walks that we’ve wanted to try for a bit. Wytham Woods is first on our agenda! 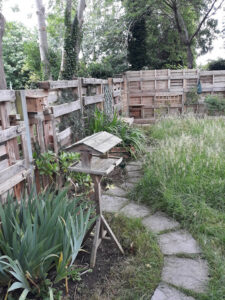 Having spent the last year or so with zero energy and zero spoons and absolutely no desire to go into our garden (our neighbour’s garden has been the saving grace for getting outside, as they are a keen gardener and so if we wanted beautiful flowers, there’s always something there), I finally have more energy and a desire to do something, and we did a Garden!

We’ve taken out the over-enthusiastic goose grass, put in purple wisteria (not in the same quantities…), added two raised beds, cleared the path, encouraged the tomatoes, planted some more veg, got to the gooseberries before the birds (TAKE THAT, YOU THIEVING BASTARDS – we got TWO last year. TWO!) and some raspberries, took a bunch of old wood over to our neighbour for burning, added some trellis for various things, restrained some rather enthusiastic growers, and generally Tidied. 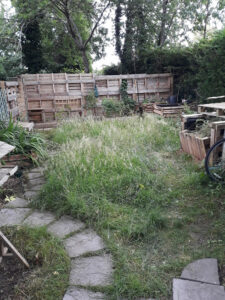 We’ve got a few more plans, too, which feels nice (and like they might actually get done!) – dig in the path, sort the patio, add some plants to the fence (we have some small flexible plant pots, so we want some climbers/smellies/herbs in the pallet holes), tidy the shed, and sort the compost. But it feels like a nicer area to be in, and that’s really satisfying.

The wild meadow in the centre is growing nicely, too – we put yellow rattle in last autumn to fight back against the grass and that’s flowered nicely this summer, plus there’s been a bunch of other odd things popping up from the wildflowers I scattered in October. The bees are definitely enjoying it!

5.WOE (and also WOE, and more WOE, and have some extra WOE) 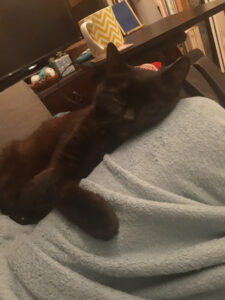 There has been the standard amount of very vocal woe from a small black furry Woe Machine, but there have also been purrs – so many purrs! I picked him up the other day and he was just rumbling away in my arms. He’s been DEMANDING cuddles in the morning (me) and evening (my partner) and enjoying belly rubs (!!!!!! – only my partner is brave enough for this, I haven’t dared yet.) In short, he’s being absolutely spoiled rotten, and is enjoying it thoroughly – despite the ever-present wailing and claims that he is Starved and Neglected and How Very Dare We. Dare I say, he is actually quite happy (especially when there are biscuits.)

As you can probably hear, I’m doing better; there’s light at the end of the tunnel, and it’s not on fire! I’m definitely still grey, and have occasional bad moments, but they’re nothing like as bad as they were. I’m slowly coming out of a pit of no-energy too, but it’s translating at the moment into something that feels almost manic; I’m keeping going and keeping going and somehow it doesn’t really feel like my brain’s involved in that! But if it means I can get out into the garden and not either immediately feel horribly overwhelmed or need to spend a day recovering from the small amount of work I do manage, then I’ll take it.

I have to admit, I’m actually worse with motivation now; I’m able to feel slightly enthusiastic about some things, so it’s making everything that I’m not enthusiastic about that much harder. I’m also still finding people hard; I don’t know what to say! I’m doing my best to keep going and also respond to people who have contacted me, and start to repair some of the missed communication threads, but it’s going to be a slow process. (As one of my ex-colleagues said: you send someone an email, and then they email back – and expect you to reply again?! I already did the email thing!!)

I’m also now having to deal with some Actual Feelings, and that has meant a few breakdowns – the nice thing about not caring is that, y’know, zero fucks, but now… but hey ho, I have coping mechanisms, and I just gotta get the practise in again! It does also mean that I’ve got to actually deal with/work through/get out a bunch of stuff, so that’s going to be fun – especially if this is only the start of everything lifting. But again, if it means I’m actually feeling instead of just being numb, then I’ll take that as progress.

So overall: doing better, and cats.